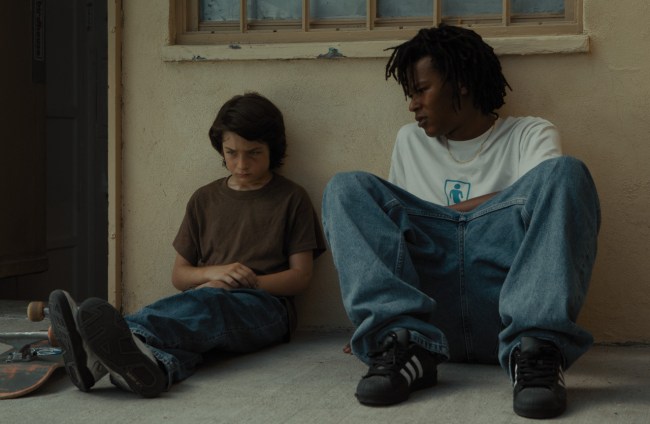 In recent years, “the 90s” has become less of a decade and more of an idea— a supposedly carefree time children of the era can reminisce about whenever they want a temporary escape from the crushing reality of adulthood.

It’s easy to don your rose-colored glasses and look back fondly on the days where trapper keepers covered with rainbow unicorns were a status symbol, Beanie Babies were considered a solid investment, and Chumbawumba graced the radio waves.

However, it’s also easy to forget how things actually were.

The internet has created an endless appetite for nostalgia— a craving no number of quizzes or listicles is capable of satisfying.

Due to this hunger, the world has been subjected to countless reboots of movies and shows from the 90s attempting to turn a yearning for the past into cold, hard cash but few have managed to truly capture the feeling of the times.

However, thanks to Jonah Hill, we now have a very notable exception in the form of Mid90s.

If the 90s have a special place in your heart, there’s a very good chance Hill does as well thanks in no small part to Super Bad and the other movies the long-time member of Apatow Mafia was a part of.

Super Bad may be the definitive coming-of-age film of the 2010s and with Mid90s, the first-time writer and director has thrown his hat into the ring to vie for this decade’s title.

The film follows the trials and tribulations of a young teenager trying to fit in with the “cool kids,” which in this case is a group of cigarette-smoking, 40-chugging skateboarders with an undying love for profanity.

In previous interviews, Hill said the last thing he wanted to make was a movie that reeked with the stench of nostalgia and he managed to do so by capturing the spirit of 1995 while telling a story that could take place in any era.

I got the chance to briefly chat with Hill as well as a few members of the cast— including a conversation with Sunny Suljic and Na-Kel Smith, who are both poised to become breakout stars thanks to their respective performances in Mid90s.

Neither Smith nor Suljic grew up during the time the film takes place (the former was born in the mid-90s and the latter is 13 years old).

When I inquired how they were able to understand what the mid-90s were like without having experienced the period firsthand, I discovered one of the major educational tools was also one of the film’s most defining elements: the music.

The only music [from the 90s] I was familiar with before I even got cast was Tupac. When I heard the music in the 90s and heard so many songs it just opened another world for me.”

Hill recently shared an eclectic mix of tracks he gave the cast, which I recommend listening to if you can’t afford a time machine.

It’s easy to compare the movie to the likes of Harmony Karine’s K.I.D.S. (the director briefly appears n the film) but there was only one movie Hill made the entire cast sit down to watch together: This Is England (which, interestingly enough, Gareth Evans told me had its fingerprints all over Apostle).

Hill explained why that particular film was required viewing, saying:

“This is England was a great influence because it was the only film I showed to the kids in the movie because I wanted to show them how raw child actors could be [and] how naturalistic young acting can be.”

This kind of research was especially key for Smith, a professional skateboarder who— aside from videos shot with a fisheye lens— had never appeared on screen until this film and whose only previous experience with Hill was watching his movies (he’s a Super Bad guy):

“I knew he was an actor that started off in comedy and started to get different roles, some more serious. He was just a good actor to me.

I guess I was kind of surprised by how cool he was. I never expected to meet the people I see in movies… seeing him and being like ‘Oh, shit. He’s cool.'”

This was also Suljic’s first time working with Hill and he told me he was most surprised by just how passionate the film’s creator is about its subject:

“Jonah knows a lot. He’s a skater at heart. [He] knows way more about skating than I do and I’ve been skating for super long.

One thing that surprised me the most was how passionate he was about skating. I didn’t really know he skated.”

However, Smith gave Hill some credit for that 14%:

Many of the most defining moments in Mid90s take place at the Los Angeles skate shop the characters call home base, where the teenagers trade jokes and participate in some impressively crude games of “Would You Rather?”

According to Smith, it’s a pretty on-point depiction of the places he grew up in:

I used to go into a store called 118 Hollywood.

I used to go in there and go to the skate shop and see people doing good tricks, teaching me stuff. That kind of energy never goes away.

You go to a random skate shop and it’s the same type of deal. They’ve got their kids that come by to hang out. You’ve got people who think they can really make it.

His co-star echoed the sentiment:

Everyone smokes and drinks in there. It never really changes.

With skating, everyone knows each other.

Hill might have nailed the aesthetic of skate culture during the era, but when I asked him to pick the one film that sums up the period, he didn’t hesitate when replying:

Pulp Fiction. It’s just the definitive movie of the mid-90s.

Mid90s premieres in select cities around the country today and will be released nationwide on October 26.