Check Out The Incredible First-Look At Universal Studios’ ‘Super Nintendo World’, Which Opens In February 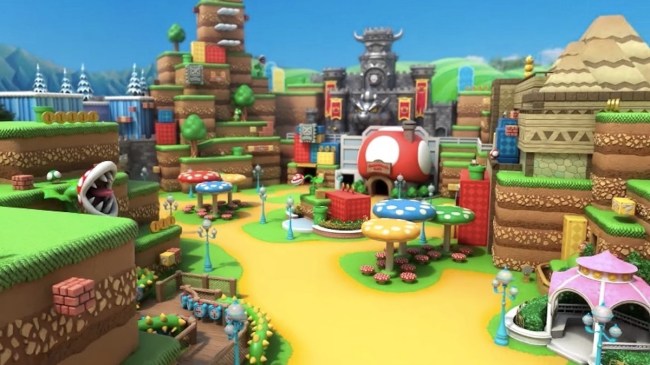 It’s a hell of a time to be a Mario fan. Not sure that being a “Mario fan” is a thing, but if you consider yourself one, then congrats! What a time to be alive.

Not only is a perfectly solid-looking (Chris Pratt’s pretty bizarre Mario voice aside) tentpole animated film set to release next year — which stars the likes of Pratt, Jack Black, Anya Taylor-Joy, Seth Rogen, Charlie Day, Keegan Michael-Key, and more — but the official “Super Nintendo World” is set to open at Universal Studios Hollywood on February 17, 2023.

Super Nintendo World takes you into the world of Super Mario Battle Team Bowser on the groundbreaking Mario Kart ride. Play interactive games throughout the land and track your score with a Power-Up Band. Dine at Toadstool Cafe, meet Mario and friends, and purchase exclusive merch at the 1-UP Factory store. [via Universal Studios Hollywood]

Now, while I’m certainly not in a rush to have kids, it’s stuff like Super Nintendo World and Harry Potter World or that new Star Wars theme park that makes me AMPED to have them. While I’m simply too proud to be a Disney Adult, having a kid is like a free pass into these theme parks that all adults secretly wish they were able to enjoy on their own. And that’s basically all children are good for, right?

As for the aforementioned Super Mario Bros. Movie, that’s set to hit theaters in the United States on April 7, 2023. The film was produced by Universal Pictures and Illumination, which is the studio behind the behemoth Despicable Me franchise. The most recent Despicable Me-related film, Minions: The Rise of Gru, was released earlier this year and made nearly $1 billion at the global box office (an astounding $920 million, to be exact).