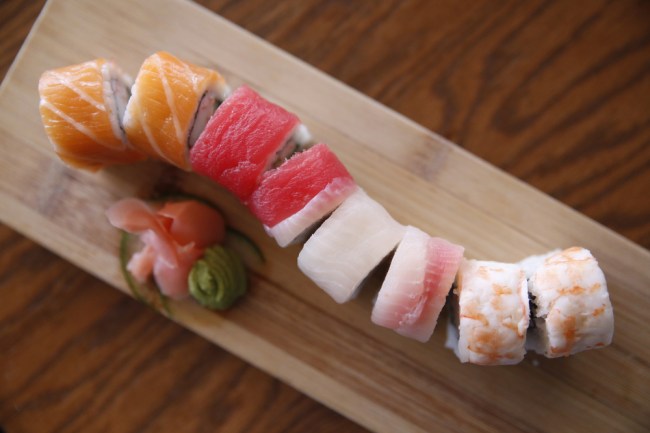 A California man who ate sushi every day is changing his raw fish diet after a 5-foot-long tapeworm “wiggled” out of his body. The sushi-lover went to a Fresno hospital after he extracted a 5’6″-long tapeworm from his body. The man blames salmon sushi for this enormous parasite growing inside of him. Dr. Kenny Banh documented the stomach-churning incident on his medical podcast called “This Won’t Hurt a Bit.”

“Apparently it was still wriggling when he put it in the bag but it had died in transit,” Banh said. The anonymous patient showed the doctor the giant parasite, which was over 5-feet-long and was wrapped around a toilet roll. Are you ready for how the lengthy parasite was removed from the patient’s body? I don’t think you’re ready. Okay, here we go.

Five-foot long tapeworm came 'wiggling out' out of man's body after he ate sushi https://t.co/P6VjfN9iHm pic.twitter.com/pldGRbm1Vt

Banh said a young man walked into the hospital complaining of abdominal cramps and bloody diarrhea in August. One unfortunate session in the bathroom ended with the patient thinking a piece of his intestine was hanging out. It wasn’t his intestine thankfully. The patient asked to be tested for worms. You never want to have the same medical maladies as a cocker spaniel. “Oh, my goodness my guts are coming out of me,” Banh recalled the man saying and then he allegedly started pulling the worm out. And he pulled. And he pulled. And he pulled. Eventually the entire massive tapeworm was removed from his body. The patient was given a de-worming pill which, is actually no different from the ones given to your doggo.

“He said he’d felt like something was moving around in his guts and he thought it was just gas,” Banh said of the patient. “He’d been in discomfort for a few months.” The poor, poor man said he ate sushi, especially salmon sashimi, almost every day. Tapeworm larva can survive in raw salmon and then set up shop in a human’s digestive tract. The man with the gigantic tapeworm said that he would continue eating sushi, but he would stop eating salmon sushi.