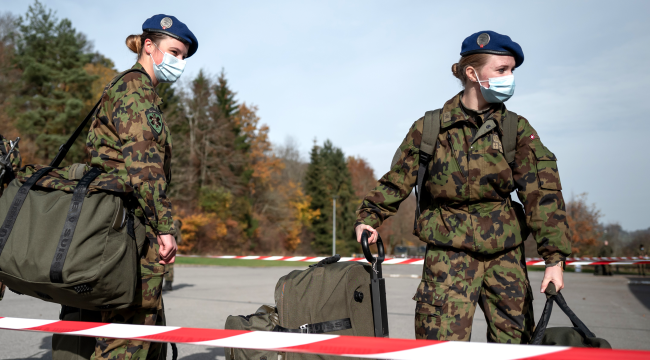 First off, yes, there really is a Swiss Army. That’s not just something they made up to sell those fancy pocket knives. Second, wouldn’t you think that a country that came up with an invention like the Swiss Army knife would understand that men and women wear completely different kinds of underwear?

Apparently not, because, it took until the year of our lord 2021 for the Swiss Army to finally figure out that they should stop issuing men’s underwear to all of their female recruits.

For the first time ever, Switzerland will be allowing female members of their army to wear women’s underwear… on a trial basis.

Not only that, the Swiss Army will be issuing not one, but TWO different sets of female underwear, one for warmer months and one for colder months, reports the BBC.

Why the sudden change of heart regarding women’s underwear? Recruitment, of course.

Only around 1% of the Swiss armed forces are female. Their goal is to get that number up to 10% by the year 2030 and they think this new underwear policy might help.

“The clothing is designed for men, but if the army is really to become more feminine, appropriate measures are needed,” said Marianne Binder, a member of the Swiss National Council.

“It makes a difference whether you have to crawl on the floor with 27 kilograms of luggage or sit quietly on an office chair,” said one unnamed Swiss soldier.

According to the BBC, prior to this move female rercuits were given “loose-fitting men’s underwear, often in larger sizes, which can be uncomfortable.” Tell me about it.

Next up? Combat clothing, protective vests and backpacks that are actually designed with a female in mind.