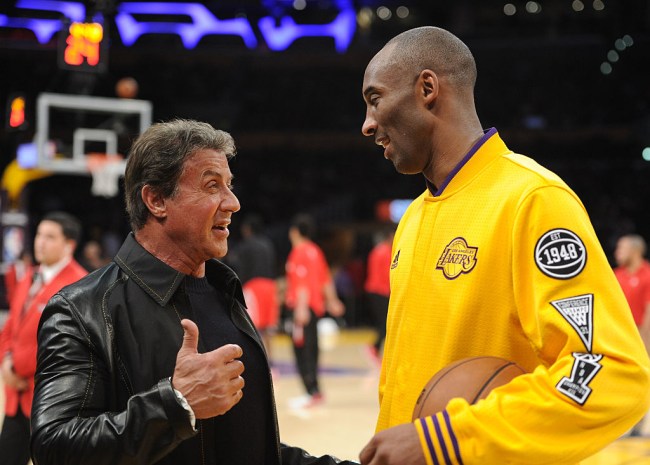 Kobe Bryant is associated with the city of Los Angeles and rightfully so since that is where he played all 20 seasons of his illustrious NBA career. But Kobe ascent to stardom started in Philadelphia. Philly is where Bryant lived since he was 13-years-old and where he made a name for himself as a top high school basketball player. Sylvester Stallone believes that Kobe is such a Philly icon that he should have his own statue in the City of Brotherly Love right next to the Rocky statue.

There have been no shortage of tributes honoring the late great Kobe Bryant since his death just over a week ago in the horrible helicopter crash that killed nine, including his 13-year-old daughter Gianna. Nearly all of the tributes have been symbolic and temporary, but Sylvester Stallone wants to make a permanent homage to the NBA legend. Stallone was asked by TMZ if he thought Kobe should have his own statue next to the Rocky Balboa sculpture at the entrance of the Philadelphia Museum of Art. Stallone responded by saying, “Absolutely!”

A Kobe statue in Philly makes way more sense than a statue dedicated to a fictional movie character.

Sly Stallone also posted a tribute to Kobe on Instagram. “The world lost a great man and a great champion,” the Hollywood actor wrote. “I feel so bad for his family. Breaks my heart. Athlete, writer, innovator, role model, #OneOfAKind.”

A makeshift shrine has been set up outside the Bryant gymnasium at Kobe Bryant’s alma mater, Lower Merion High School. pic.twitter.com/RllivtUNu8

Lower Merion High School paid tribute to their fallen star by having a moment of silence that lasted for 33 seconds, which was Kobe’s jersey number at the school.

Kobe’s high school, Lower Merion, had a 33 second moment of silence tonight to honor him.

#33 was his high school number 🖤 pic.twitter.com/QdAVyV2jD4

The high school unveiled Kobe’s jersey on Saturday with the help of Bryant’s cousin. Bryant’s high school jersey was stolen in 2017 and bought by a collector in China. The jersey was finally returned to the school last week.

In Lower Merion’s first home game since Kobe’s death, Bryant’s cousin unveiled his HS jersey, which was stolen in 2017 and bought by a collector in China but finally returned on Saturday.

Merion ended up winning the game in overtime.

Last week, the Philadelphia 76ers honored Bryant by shining nine rays of light on Kobe’s high school jersey for the nine victims of the tragic helicopter crash in Calabasas, California. There was also 33 seconds of silence.

The Sixers placed nine beams of light on the court and rang their ceremonial bell nine times tonight in remembrance of the nine lives lost in the helicopter crash, as well as honoring Kobe with a 33 second moment of silence, which was his Lower Merion number. pic.twitter.com/exctHsIAXU