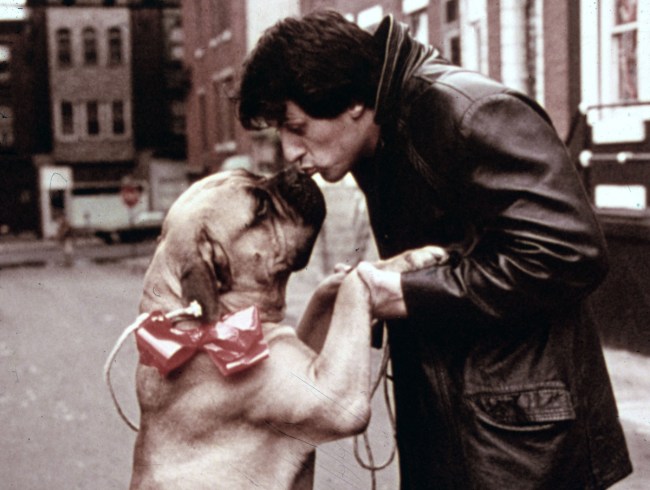 Many of us know about Sylvester Stallone’s struggles prior to hitting it big with 1976’s Rocky — an all-time top sports flick, in my personal opinion. But, good lord, I had no clue Sly basically went through hell and back in order to follow his dream of becoming an actor when everybody else pretty much doubted he could.

Born with a partially paralyzed face and slurred speech, Stallone wasn’t exactly what many assumed Hollywood would be looking for in a leading man. But the dude never doubted himself, and he kept pushing through all the “no’s” and adversity to get to the top. The result? Sylvester Stallone became one of the biggest actors on the planet, and his current net worth is estimated at $400 million or so.

So if you need some motivation today that you should always stick to your guns, keep hustling, bet on yourself and just keep going, take a look at this Twitter thread that details how Stallone went from college dropout to homeless to a badass movie star. Seriously, if this doesn’t give you inspiration, something might be wrong with you.

This is the wild story of how one negotiation changed his life forever and why betting on yourself is always the right move.

After 3 years at the University of Miami, Sylvester Stallone dropped out of college, deciding to move to NYC to chase his acting dreams.

Born with a partially paralyzed face & slurred speech, everyone thought he would fail. pic.twitter.com/YIBbm8Kv9r

When he wasn't sleeping in the Port Authority Bus Terminal after being evicted, Stallone worked as a movie theater usher & cleaned lion cages at the zoo.

As if that wasn't bad enough, it got worse.

3) Homeless with no money to his name, Sylvester Stallone even starred in a softcore pornography film.

Thin, hungry, and with no money to eat, Stallone sold his beloved dog "Butkus" for $40 in front of a 7-Eleven. pic.twitter.com/P6FANEpCLO

5) In 1975, after watching the Muhammad Ali vs. Chuck Wepner fight, Sylvester Stallone was inspired.

Stallone spent the next 3 days writing, emerging from his apartment exhausted with a film script.

He called it "Rocky."

A studio to produce it. pic.twitter.com/UwwJBnmJi9

6) When Sylvester Stallone pitched his script about an "uneducated debt-collector-turned-champion boxer named Rocky Balboa" to producers, they loved it.

They wanted to buy it, removing Stallone from the starring role & replacing him with a more popular actor.

Demanding the film be made with him in the starring role, Stallone turned the offer down.

“It was really insane at the time ’cause I was broke”

8) Confident in his acting ability, Sylvester Stallone accepted $25,000 for the script, rather than $360,000, on the premise he would maintain the starring role.

Butkus was in the film 🙂 pic.twitter.com/lBAqUEO0j9

9) Rocky went on to receive 9 Oscar nominations, winning 3 awards including Best Picture, and grossed over $200M.

In the years since, it has become one of the most successful film franchises of all-time — making 8+ movies.

Today, Sylvester Stallone is worth more than $400M.

10) Whether it's sports, business, or acting, the most successful people in the world have consistently taught us two things are required:

Sylvester Stallone followed both principles, going from homeless to a $400M net worth.

That’s… something, man. To think Sylvester Stallone persevered through all of that to reach his goal is absolutely amazing. It’s also a reminder that, just when you think you’ve got a plan, something happens that completely changes your fate. In Stallone’s case, it was watching that Muhammad Ali—Chuck Wepner fight, which sparked the idea to write Rocky. He then refused to take the first offer for the script in order to star in the movie himself. Sure, there’s lots of luck in there, but he never wavered from his goal.

Fast-forward nearly 50 years and Stallone is sitting pretty, recently listing a massive, 21,000-foot mansion in Beverly Hills. There are some people who get rich and are tough to root for. But, in many cases, there are people who literally went from nothing to wealthy thanks to hustling, staying focused on their goals, gambling on themselves and making it all happen. That’s Sylvester Stallone’s story, and it’s so awesome and motivating to see.