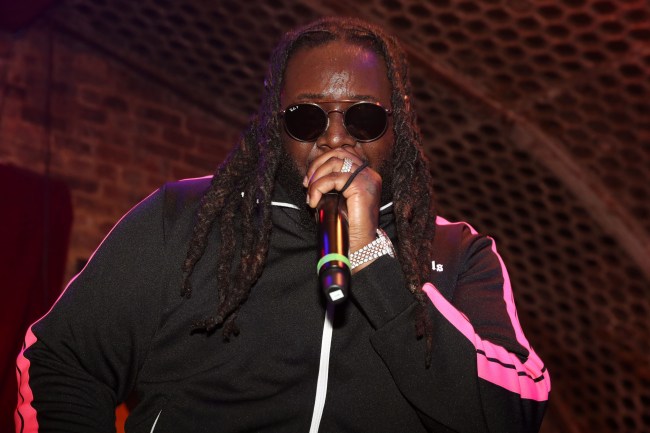 I’d imagine one of the shittier job description line items for a world famous performer would be playing at conventions or company retreats or any other congregation of people who would never otherwise constitute as fans.

T-Pain has probably done hundreds of them, but before Sunday’s set at Denver’s BBYO (B’Nai B’Rith Youth Org.) Convention, I’m not sure he’s ever walked out of one. The BBYO is “the leading pluralistic Jewish teen movement aspiring to involve more Jewish teens in more meaningful Jewish experiences,” according to the website.

While performing his hit “Bartender” for droves of teens who were probably born after the song was released, one doofus in the audience tossed a beach ball on stage and drilled the 33-year-old Florida native square in the face. T-Pain immediately pulled the mic away from his mouth, did a dope little spinny trick with it, tossed it on the DJ booth and bailed from the stage.

According to TMZ, T-Pain had previously urged the audience to not toss beach balls on the stage and said if it happened again he was leaving.

T-Pain cut a show early because he got hit in the face with a beach ball (and the full video is kind of incredible): https://t.co/pvd8FLnESn pic.twitter.com/tvtbbOpGrq

T-Pain was reportedly only 30 minutes into his set before bailing.

It appears the rapper and producer isn’t harboring any ill will. After the incident, T-Pain responded to a BBYO member who reached out to him to apologize for how things went down.

Thanks for having me