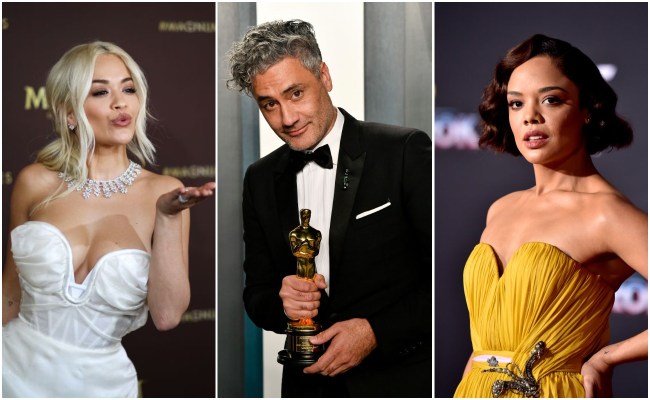 Thanks to a recommendation from co-worker Matt, I’ve been listening to this podcast from Jason Bateman, Will Arnett, and Sean Hayes called Smartless, where they essentially just shoot the breeze with their fellow actor buddies. If you’re a movie/TV fan, it’s a great listen.

A couple of weeks ago, I was listening to one of their episodes when the topic of paparazzi came up, which in turn elicited nothing but pure disdain from the trio. Celebrities, quite obviously, *hate* the paparazzi. And who can blame them? Sure, it can be chalked up to the price of fame, but regardless of how rich you are, being constantly followed by middle-aged men snapping photos of you without your permission simply blows.

Taika Waititi Rita Ora and Tessa Thompson were photographed just chillin and making out a bit…. But Its all love… pic.twitter.com/O1pCkkX8qE

This is all to say that these reports of Taika Waititi being “reprimanded” by Disney/Marvel execs over those viral photos of him making out with BOTH Rita Ora and Tessa Thompson (king shit, it’s simply king shit) are absurd. Not to mention, not only is Disney in bed with Waititi thanks to Marvel, but also due to Lucasfilm, as the Thor: Love and Thunder director is also developing a new Star Wars film.

The Daily Telegraph reported that Marvel executives are unimpressed by the photos, which went viral. According to a source close to Thor: Love and Thunder, the behavior seen in the photo is ‘not exactly the image they’re looking to project in relation to one of their biggest franchises’. They added that even though Taika is known for being a ‘party animal’, Marvel bosses think the photos ‘crossed a line’. [via Metro]

Sorry, but how on Earth is it Waititi’s fault that paparazzi with camera lenses the size of a Barrett .50cal scope decided to make his private sex life public? Taika Waititi FUCKS, people, let the man live. If anything, he should be applauded and revered for having such otherworldly game and being able to pull two certified rocketships such as Ora and Thompson. If I could be anyone when I grow up, it’d be Taika Waititi. The fact that he’s got an Academy Award under his belt also helps.