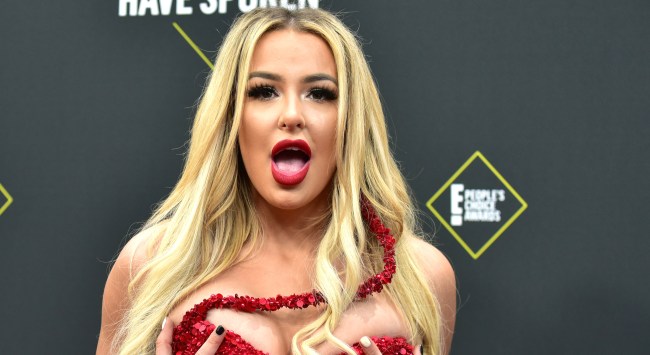 You know what’s a good idea? Casting your vote in this year’s election. You know what isn’t? Sharing nude photos with anyone who can prove they voted for Joe Biden. This is a lesson YouTuber Tana Mongeau might be learning the hard way.

In case you are wondering who Tana Mongeau is, and if so, congrats, she’s a 22-year-old YouTube personality who was once fake married to another YouTube personality, Jake Paul. She was also in a relationship with Bella Thorne for about a year and a half.

She’s got 5.45 million YouTube subscribers and so, much like Thorne and many others, she’s been trying to monetize that monstrous social media following with an OnlyFans account.

Mongeau has also been trying to get people to vote for her choice in the United States presidential election, Joe Biden.

She even went so far last week to openly offer to send nude photos to anyone who could prove they voted for Biden.

“if u send me proof u voted for Biden I’ll send you a nude for free,” she tweeted with the hashtag #bootyforbiden to her 2.4 million Twitter followers.

Mongeau later wrote on Instagram that she had so many requests that “#bootyforbiden broke tana uncensored.”

That was the least of her problems, however.

Turns out that trading nude photos for a presidential vote can be construed as what’s known in legal circles as “vote buying,” which under U.S. electoral law is a felony.

UPDATE: Tana Mongeau says she got thousands of messages on OnlyFans after offering nudes in exchange for proof of vote for Biden. Tana says people “willingly voted for Biden.” According to Cornell University, making any offer to exchange something for vote is an electoral crime. pic.twitter.com/h7UptbafKE

Hey, it could be worse. At least Mongeau didn’t take a selfie with her ballot.