My Girlfriend Won’t Let Me Get A Tattoo. She Has A Tattoo. 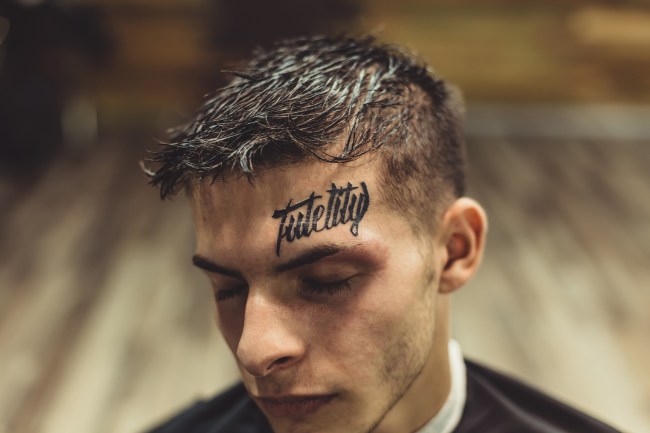 We were out on the boat Saturday around 5PM, floating among the off-duty lobster boats and along the pine-thicketed shoreline, a Maine Beer Company travel mug filled with their Post Ride Snack IPA in hand. This is where I grew up and it has held the interim “home” belt since March—South Freeport, Maine. From July 15th until August 15th, you can swim without losing your breath. But floating in the boat instills a special peace that these shark-infested waters can’t provide. These days, we stay dry.

The light was otherworldly, a production set up by the blank check largesse of a Michael Bay movie production. Speaking of Bays, we live on Harraseeket Bay, where a medieval, gothic tower rises above the trees as an incongruous landmark. It once stood as part of some hotel that burned down. At least that’s what I’m told. It looks more like a place where bad children were sent and then, years later, they wrote books about their experiences to bolster their congressional campaigns.

I made the tower sound worse than it is. In truth, it has stood as the cementing image of my childhood in Maine. As we drifted, I turned to my girlfriend and said, “if I were to get a tattoo, it would be a combination of a lobster boat and that tower.”

She didn’t say anything for a minute. That’s usually a bad sign. When she takes a beat to measure her responses, she usually starts with “don’t take this the wrong way” or “can I be honest with you?”

This time: “Look… I can’t tell you what to do with your body.”

It’s a nice thing to hear from a guy when you tell him surprise, we’re pregnant. But it’s not exactly a ringing endorsement for a tattoo from my girlfriend, who, BY THE WAY, HAS A TATTOO. And to clear up any doubt, she continued:

What does that mean? Feels racist, tbh. Plenty of great paintings have been made on bright white canvas. Makes the colors pop. Helps the artists see what he/she is doing, I’d think.

“Would you get it somewhere visible?”

As best as I can tell, the only invisible part of my body is the skin inside my butt cheeks leading to my sphincter. That’s tender skin. Ever go mountain biking? Those roots and rocks wreak havoc on the inner-cheek skin. I wouldn’t let a needle within 10 yards of that supple epidermis. I told her I’d put it on my upper arm, probably.

“If you make it visible to people, you’ll have to constantly explain it. You’ll be pointing at your arm and telling people ‘this means this, this means this.’ That’s annoying.”

Well, fair point. Hadn’t thought of that. I can’t stand museum tours. I certainly wouldn’t want to be acting the part of museum guide with my own arm as the piece under observation.

“And what if something horrific happens in Freeport, the town you’re symbolizing? Like a mass suicide, or a murder spree? Then you’ll be a walking billboard endorsement for a place that everyone hates.”

Wow. I REALLY hadn’t thought of that. Makes you wonder how many Penn State football tattoos have been removed.

I mentioned the hypocrisy of her having a tattoo and telling me not to get one. She reminded me that her tattoo is symbolic, sentimental, and tiny—commemorative of a close family member who passed away. Family deaths seem to be the one universally-accepted reason for a tattoo. Sobriety milestones are up there too. Also, tribal insignias that honor one’s heritage/roots. My roots aren’t that honorable.

Nevertheless, it’s a tattoo. She paid a stranger to sew ink into her body. So for all her sound wisdom and incontrovertibly good points, I won’t hear it from her.

My body, my choice.

I’ll hold off for now though. Need to make sure Freeport, Maine doesn’t go on a child kidnapping spree.