While You Can Barely Endure A 30-Second YouTube Ad, A Teen Survived 49 Days Lost At Sea On This Rickety Raft 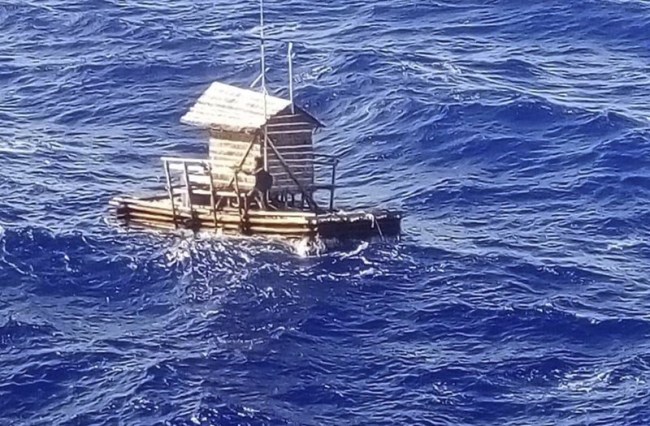 While the worst things that you have to endure is when your fat hand can’t get deep enough to pluck the last few potato chips in a Pringles canister or when you go to poop and forget to bring your phone, a teen was able to survive 49 torturous days lost at sea in the rickety raft you see above.

Aldi Novel Adilang works on a floating fishing hut in Manado, far northeast Indonesia, 1,300 miles from the capital of Jakarta. The wooden fishing platform called a “rompong” has a gas stove, cooking utensils, and a generator. Aldi’s worked alone on the rompong and his job was to light the lamps every night to attract the fish towards the traps. Every week someone would collect the fish and replenish the supplies of food, drinking water, and fuel.

On July 14th, a storm ravaged the area and snapped the rope that anchored the fishing rig. Aldi and his fishing hut was carried off to sea and his nightmare began. All Adilang had on the ramshackle structure was a walkie-talkie, a bible, and a few fishing supplies. He only had about a week’s worth of supplies.

“After he ran out of the cooking gas, he burned the rompong’s wooden fences to make a fire for cooking,” said Mirza Nurhidayat, a diplomat at the Indonesian consulate in Osaka.

Aldi drank seawater by soaking his clothes in the ocean and then wringing them in an attempt to take out some of the salt. “He drank by sipping water from his clothes that were damp from the sea,” Nurhidayat said.

Adilang’s days consisted of catching fish in the mornings and reading his Bible in the afternoons. Aldi would often think about his family and then cry because he thought he’d never see them again. “Aldi said he had been scared and often cried while adrift,” said Fajar Firdaus, a diplomat at the Indonesian consulate in Osaka.

As the days passed and his hope dwindled, Adilan contemplated suicide by jumping overboard. Instead, he read his Bible and prayed.

Then a shark started circling the precarious vessel. “I could only pray that the shark went away,” Adilang said.

Finally, after 49 days lost at sea a boat saved Aldi. On August 31st, the Panama-registered bulk freighter MV Arpeggio received an emergency radio message from Aldi’s walkie-talkie. The vessel circled the tiny boat four times, but couldn’t get close enough. Adilang couldn’t wait to be rescued so he jumped into the water and swam to the ship. The crew threw down a rope ladder and the teen climbed for his life.

The MV Arpeggio was on its way to Japan when they found the castaway near Guam. The sea had carried Aldi about 1,500 miles from where he started.

On September 6th, Aldi arrived in Japan and was flown back to Indonesia on September 9th after his identity was confirmed. And you thought you had it rough when you have to watch a 30-second ad on YouTube.