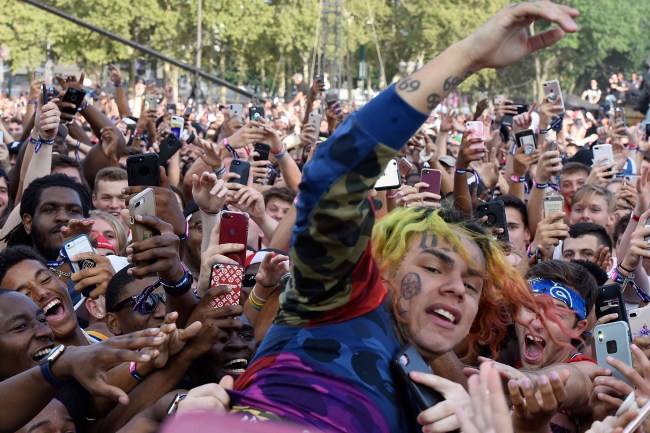 Remember when Daniel Hernandez aka Tekashi *Googles correct spelling* 6ix9ine was facing 47 years to life for weapons charges and racketeering linked to his involvement with the Nine Trey Gangsta Bloods?

Yeah, well, that got slashed to 24 months in a private prison.

And if that wasn’t cushy enough, the 23-year-old recently cut a record deal with his former label (10K Projects) worth more than $10 million, all from the comforts of his cell.

In a new report from Insider, 6ix9ine, who has already served 14 months behind bars, is trying to use his convenient cooperation (also known as “snitching”) with authorities–which helped land him in a private jail instead of a Bureau of Prisons facility–as a bargaining chip to get back to the negotiating table.

Rapper Tekashi 6ix9ine has asked a judge to allow him to spend the remainder of his prison sentence in home confinement, citing fears of Blood gang members in the facility where he’s currently being held, according to a court filing reviewed by Insider.

Tekashi’s lawyer, Lance Lazzaro, claims that even in the private jail his client is still housed with “various members of the Bloods.”

Lazzaro highlighted the danger Tekashi is in by referencing what happened to the rapper’s co-conspirator, who was injured while serving time in a public Bureau of Prisons facility.

“As the court is well aware, Rolland Martin, a co-conspirator convicted in Hernandez’s case, was almost killed in a Bureau of Prisons facility, not for cooperating with the government, but for merely renouncing his membership in the gang,” Lazzaro said.

Lazzaro’s out here acting like Tekashi deserves the Nobel Prize for “cooperating with the government,” as if he was simply being an altruistic patriot and not saving his own ass.

With that said, I have no qualms with the law determining Tekashi’s fate. If he gets out tomorrow, great, his problems are only just getting started. If he is forced to spend his entire sentence behind bars, thems the breaks. Anyone who’s seen the Breakfast Club interview with him from 2018 knows that may be exactly what he needs.