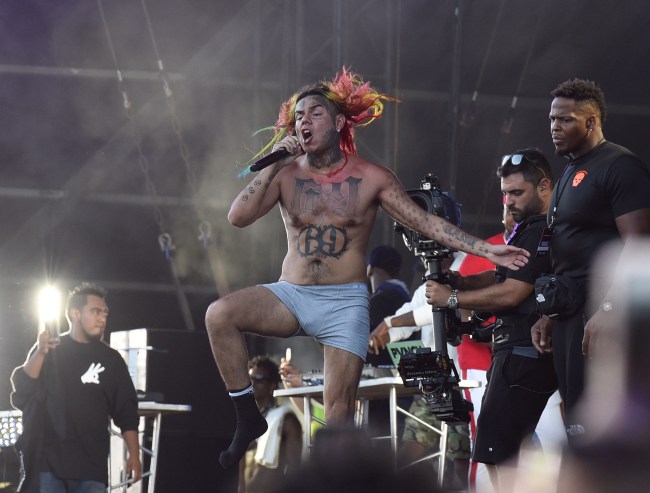 Fuck college, kids. Make the smart business move and use that limited bandwidth to take up federal racketeering and weapons charges! A truly HOT* industry at the moment.

*For rappers with long colorful hair and a face that looks like inside wall of a rest stop bathroom stall. Also, must be open to snitching on everyone he or she has ever known. Oh yeah, and I guess if you avoided jail time and the sex-offender registry for pleading down to a 2015 sexual-misconduct case involving a minor, that’s of value too. Proficiency in Microsoft Excel strongly recommended.

Daniel Hernandez, the 23-year-old rapper with the stage name Tekashi 6ix9ine, just cut a record deal with his former label (10K Projects) worth more than $10 million from the comforts of his prison cell, TMZ reports.

Once 6ix9ine’s a free man, he will reportedly receive the money in return for putting out two albums, one in English and one in Spanish.

Let’s keep in mind that he faces 47 years to life in prison for weapons charges and racketeering linked to his alleged involvement with the Nine Trey Gangsta Bloods.

6ix9ine hopes to get leniency on his sentence after snitching on friends and associates (and Cardi B!) for various gang affiliations, even pointing out for prosecutors the gang members who appeared in the videos for his breakout hit “Gummo.”

The snitching strategy is certain a bold one, and if it reduces 6ix9ine’s sentence, his troubles would just be beginning once that prison gate opens.

But, in his true delusional fashion, the rapper reportedly believes him testifying against his old gang members will be forgotten once he’s released from prison, his new music will pop harder than ever. Which could be why he’s rejected the witness-protection program in favor of around-the-clock security after prison, if he gets out that is.

“We’re told Tekashi’s still itching to make new music, and believes he can pick up where he left off,” TMZ reported. “It’s, essentially, the hide-in-plain-sight approach.”

Anyone who watched 6ix9ine’s interview on Breakfast Club in March 2018 knew this was coming. The dude is a complete bonehead and legit thinks he’s above the law. You could also tell he would sing like a bird with the twist of an arm from prosecutors.