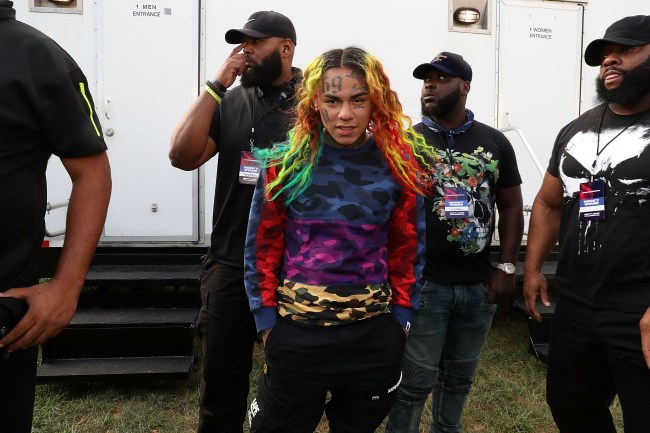 These are words thrown around by people who’ve never faced moving out of their mansions in their early 20s at the height of their fame to move into a 70 square-foot cage for the next couple decades.

These are always more alluring in theory, and are voided when you are kidnapped by your own, beaten and robbed, and a homie has sexual intercourse with your lady.

6ix9ine sat down with New York Times interviewer Joe Coscarelli in the first interview since he’s been released from prison four months ago and spoke about everything from his decision to testify against the violent Nine Trey gang to his fear of dying to his self-proclaimed equivalence to Tupac.

The 24-year-old proves once again why he’s racked up more than a billion views on YouTube in the four months since he’s been away from prison. He is a technicolor car crash and the world cannot look away.

On his decision to testify against the Nine Trey gang:

I really want this to hit home: When I was kidnapped, was I a victim? Did I cooperate? No. When they were stealing money from shows, did I cooperate? No. Did I have many chances to tell the police what I saw? Yes. I was following a street code that was upheld by me and that I thought was real. Before I broke the street code, how many times was it broken to me? “It’s all about honor, loyalty.” Well, let’s talk about if sleeping with somebody’s girl is honor, kidnapping somebody is honor, stealing hundreds of thousands of dollars from them is honor, trying to kill them is honor. “Snitching’s not street!” But street is taking advantage of one of your homies?

Do you understand the view that you don’t need to be a public figure, that you don’t deserve to be famous, based on your real-world actions with real human victims?

Maybe [your music] is fun, it’s turn-up music, but it’s not introspective.

This is one of his biggest songs. [Plays “Troublesome ’96” by Tupac from his iPhone] What’s the difference between that and “Billy”? “A born leader, never leave the crib without my heater!” You’re telling me he gave back through his art? You’re lying to me.

He’s a multifaceted artist. You only have one kind of record.

I got to feed what, in 2020, is relevant. I got to feed the masses. There’s no difference between me and Tupac Shakur.

When asked if he was worried on a day-to-day basis about his security, he responded: “Without security? A lot. With security? Nah,” before claiming his security team varies from eight to 22 former law enforcement officers.

When asked if he’s scared of dying:

[Expletive] yeah. Are you scared of dying?

You’re probably closer to it than I am.

Yeah, duh! At this point, it’s a lifestyle. I worry about it, but I’m not scared of it. The streets is a myth. Right now, if I left this interview and took the train by myself to Bed-Stuy, I wouldn’t come back. If you took a trip to an island full of cannibals, are you coming back? But you don’t put yourself in stupid situations.