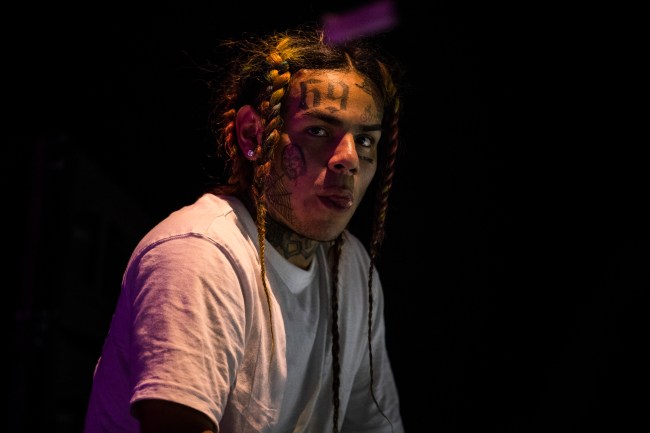 Tekashi 6ix9ine spent nearly two years in prison on charges related to gang activity in New York, and emerged from the clink a better, humbled man.

The World’s Most Infamous Snitch is back on his bullshit, despite his lawyers being “concerned” for his safety.

The rapper has climbed to number 1 on the Billboard Hot 100 with his new Nicki Minaj-featured “Trollz” diddy, 6ix9ine’s first number one and only the 40th song ever to debut at No. 1 on the Hot 100 in the chart’s history.

(Keep in mind, this dude should currently be in prison and is set to be sued by two concert promoters for $5.3 million later this month.)

The Trollz success evidently gave the 24-year-old rapper permission to knock everyone in the game who hasn’t achieved the feat: Meek Mill, Future,  Lil Durk, G Herbo, Gucci Mane, and Trippie Redd (who’s on his label and whose shirt Tekashi is repping in the video below).

“You guys ever notice that when people diss me, or they say my name, or try to clown me, the moment I respond, like the moment I address them, I’m dragging [them],” 69 said. “I get it. Well, today I’m No. 1 in the world, right, and I just wanna address a couple things.”

This dude will not stop. And I can’t look away.