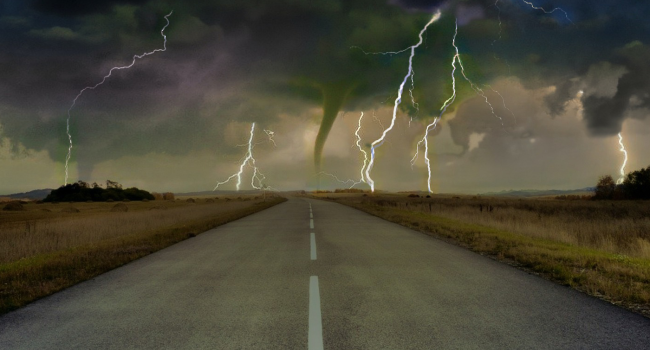 You’ve probably seen the video. A Texas teenager, driving down the road, gets swept up by a tornado, flipping his truck, then driving off.

If you haven’t seen it, you should, because it’s pretty dang amazing.

16-year-old Riley Leon, the driver of the truck, was on his way home last week after leaving a job interview at Whataburger when what could have been a tragedy was miraculously averted.

We know this because a storm chaser named Brian Emfinger just so happened to be on the scene in Elgin, Texas when it all went down and caught the entire thing on video.

“Omg… just going thru my video. This is a story about a red truck and a tornado,” Emfinger said in a tweet. “I CANNOT believe they drove away like that.”

Omg… just going thru my video. This is a story about a red truck and a tornado…. I CANNOT believe they drove away like that. #txwx #tornado pic.twitter.com/8h0nD88xFv

Leon told KHOU News that while he knew the weather was turning nasty he really didn’t want to miss the job interview.

The National Weather Service reported that the tornado that grabbed Leon’s truck was an EF-2 that peaked at about 115 mph.

“I honestly didn’t know what to do, to grab onto the steering wheel or to start praying,” Leon told KXAS News.

“On the video, it looks like I drove off but in reality I didn’t. I landed in the center of the road and I was just driving to get off the road.”

Texan Riley Leon was caught in a tornado coming from a job interview at @Whataburger this week. The tornado flipped his truck over & then upright again. He drove home in a totaled truck. But, his fortunes have changed. A dealer is giving him a new @ChevyTrucks & he got the job. pic.twitter.com/rEVo91FXZo

After the harrowing experience, one of Leon’s teachers started a GoFundMe to help him with medical expenses and new transportation. So far it has raised over $41,000.

Getting new transportation, however, isn’t going to be a problem for Leon. WFAA News reports that on Saturday he was gifted a brand new 2022 Chevrolet Silverado and $15,000 in cash by a Fort Worth car dealership.

Bonus: Leon also got the job at Whataburger. He starts on Monday.