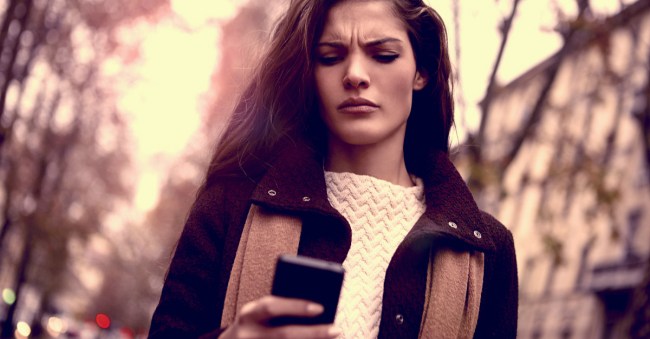 Ready for a little Texting Etiquette 101? How you use punctuation in your texts, like say, periods, for example, makes a big difference in how your messages are perceived, according to a new study.

Unless, of course, you don’t care if the people you are texting think you’re just a giant jackass. If so, then you’re free to move on. Everyone else, however, should probably pay attention.

In a recent study published in the journal Computers in Human Behavior, researchers delved deeper into some research done in 2016 with regard to texting and came away with some fascinating and very enlightening information.

The original study theorized that “the inclusion of a period after a positive one-word response (e.g., yeah.) led readers to perceive the response as less sincere.”

So they decided to test it.

Here’s some of what researchers at Binghamton University learned…

“In contrast with face-to-face conversation, texters can’t rely on extra-linguistic cues such as tone of voice and pauses, or non-linguistic cues such as facial expressions and hand gestures,” said Binghamton University Professor of Psychology Celia Klin. “In a spoken conversation, the cues aren’t simply add-ons to our words; they convey critical information. A facial expression or a rise in the pitch of our voices can entirely change the meaning of our words.”

“It’s been suggested that one way that texters add meaning to their words is by using “textisms” — things like emoticons, irregular spellings (sooooo) and irregular use of punctuation (!!!).”

They then tested out the theory about how including a period at the end of a text was perceived.

“In formal writing, such as what you’d find in a novel or an essay, the period is almost always used grammatically to indicate that a sentence is complete. With texts, we found that the period can also be used rhetorically to add meaning,” said Klin. “Specifically, when one texter asked a question (e.g., I got a new dog. Wanna come over?), and it was answered with a single word (e.g., yeah), readers understood the response somewhat differently depending if it ended with a period (yeah.) or did not end with a period (yeah). This was true if the response was positive (yeah, yup), negative (nope, nah) or more ambiguous (maybe, alright). We concluded that although periods no doubt can serve a grammatical function in texts just as they can with more formal writing — for example, when a period is at the end of a sentence — periods can also serve as textisms, changing the meaning of the text.”

In other words, as Klin states, “We read text messages in a slightly different way than we read a novel or an essay. Further, all the elements of our texts — the punctuation we choose, the way that words are spelled, a smiley face — can change the meaning.”

Confused? Here’s a video to help break it down for you.

So there you go. If you do these things and have been wondering why people haven’t been responding to you in a positive manner (or at all) when you text them, now you know.