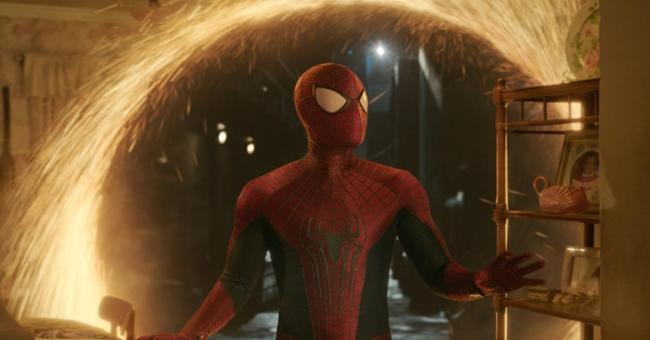 To further promote the release of Spider-Man: No Way Home on digital platforms, Marvel Studios and Sony Pictures have released a new teaser that highlights Andrew Garfield’s Spidey, or as he’s referred to in the film, Peter 3.

In this new teaser, however, not only is Garfield’s Peter Parker referred to as “The Amazing Peter #3”, but the video features the score from the Amazing Spider-Man films and uses the franchise’s official font.

As a result, some Marvel fans are taking this as a potential sign that Marvel Studios and Sony Pictures are cheekily teasing the idea of The Amazing Spider-Man 3, which fans have been calling for ever since they feasted their eyes on Garfield’s scene-stealing turn in Spider-Man: No Way Home.

this is stoking a dangerous fire 😭 pic.twitter.com/zvtdDKdUrK

holy shit did Sony and Marvel Studios really just drop a TASM trailer centered around Andrew Garfield in 2022?? And was that a subtle TASM3 tease??? https://t.co/uhsDyd3tbp

Y'all knew what y'all were doing 😑 https://t.co/bvRrIx8asZ

yall should be in prison r u kidding me https://t.co/csj5YfUNDA pic.twitter.com/6M4GaFdjTC

I think we're going to be getting TASM 3 with this tease alone.

I'm also confident Raimi Spider Man 4 has a chance aswell with Raimi,Tobey and Kirston wanting to come back to do Spider Man.

The way it's edited like a TASM3 trailer. They knew what they were doing. https://t.co/KFqPsG6AJt

SONY WHY THE FAUQ ARE YOU PLAYING WITH MY EMOTIONS LIKE THIS https://t.co/5ulX4bF1d4 pic.twitter.com/vGnFj8ExQ1

the way i thought it was #tasm3 announcement for a sec.. they need to stop playing with our feelings 😭 https://t.co/JkU30GhseH pic.twitter.com/slYlrdMNX1

they know wtf they're doing https://t.co/5EQsBnEL2U

The next film in the Marvel Cinematic Universe to release will be Doctor Strange in the Multiverse of Madness when it hits theaters on May 5. That will be followed by Thor: Love and Thunder, currently scheduled for July 8, and Black Panther: Wakanda Forever, which is set for November 11.

RELATED: The First Reactions To Marvel’s ‘Moon Knight’ Are Here — Series Praised For Its Darker Tone