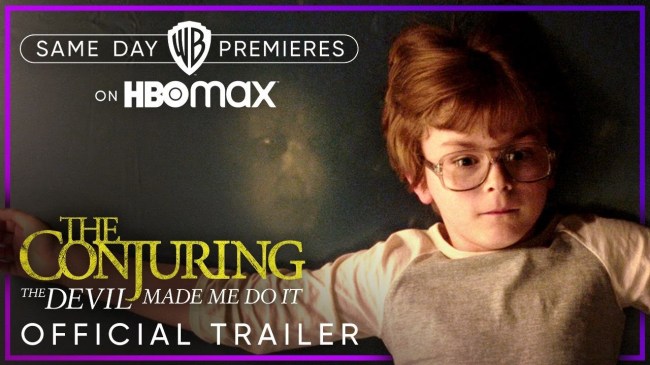 While I’m far from being a “horror movie guy” — I think that has a lot to do with the fact that my Dad used to get a kick out of making me watch Poltergeist with him when I was like 7-years-old — I absolutely adore The Conjuring franchise, which is now, somehow, EIGHT movies deep.

Here’s the official synopsis for The Conjuring: The Devil Made Me Do It, via Warner Bros.:

True horror returns. Based on the case files of Ed and Lorraine Warren, The Conjuring: The Devil Made Me Do It reveals a chilling story of terror, murder, and unknown evil that shocked even these experienced real-life paranormal investigators.

One of the most sensational cases from their files, it starts with a fight for the soul of a young boy, then takes them far beyond anything they’ve ever seen before, to mark the first time in U.S. history that a murder suspect would claim demonic possession as a defense

In addition to franchise stars Patrick Wilson and Vera Farmiga returning as paranormal investigators Ed and Lorraine Warren, The Conjuring: The Devil Made Me Do It also stars Ruairi O’Connor, Sarah Catherine Hook, and Julian Hilliard.

The Conjuring: The Devil Made Me Do It will hit theaters and HBO Max in the United States on Friday, June 4.