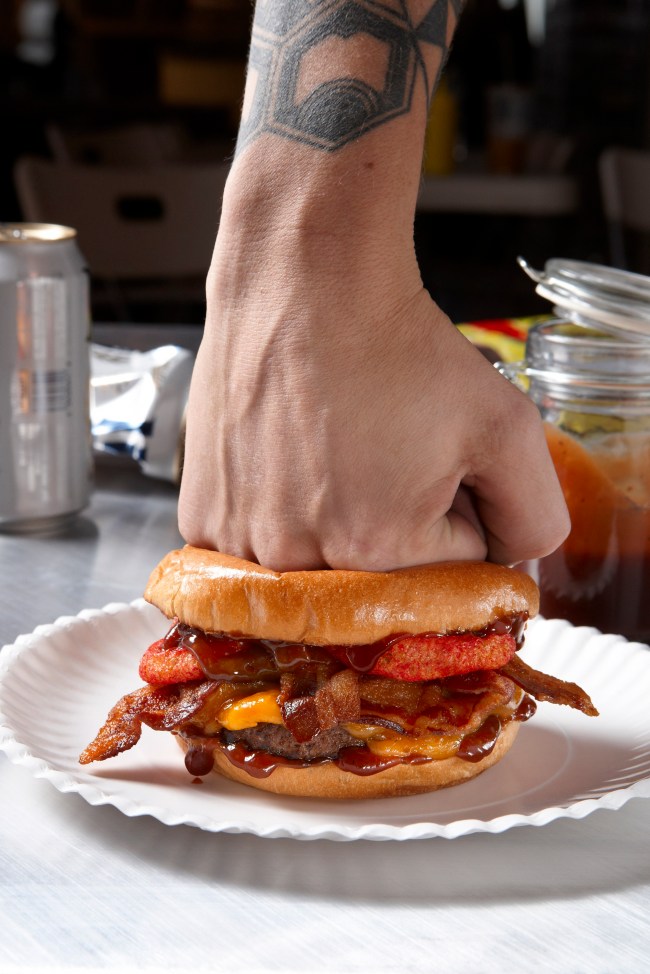 Editor’s Note: Want to win over a person’s heart and show that you’re a responsible adult between mid-week Jack Daniels binges? Learn to  your own damn food, damnit. LA-based food writer Josh Scherer just released a cookbook every Bro needs in their kitchen: It’s called The Culinary Bro-Down and filled with recipes for upping your food game.

>em>The Culinary Bro-Down Cookbook is full of irreverent essays and anecdotes, but running throughout is a deep sense of soul and self that strives to answer the question: Why can’t the deep-fried nonsense you eat with your bros at 2 a.m. have the same emotional gravitas as an intimate family dinner?

Today, we’re showing you “The Gas Station Burger” — A delicious monstrosity filled with Flamin’ Hot Funyuns and cherry cola sauce. It’s one of many delicious recipes in The Culinary Bro-Down Cookbook. Josh will take it from here:

You guys fuck with that show Chopped? Man, I hope you’re reading this while that show’s still around because it’s the single best thing Food Network’s done since Sandra Lee’s Kwanzaa cake. (YouTube it right now. The clip is only 2:45; this recipe can wait.) Four completely unknown contestants, all jacked up on promise and producers telling them to be all jacked up, run into a studio kitchen and they all get a basket filled with four random ingredients—razor clams, spicy red cheese sticks (legally they can’t say Flamin’ Hot Cheetos), fermented yak penis, and baby kale, for instance—and they all do a cooking battle against each other and there’s an ominous clock and then they get more baskets and then the judges just fucking mercilessly shred them for undercooking their yak penis but then they find out one of the contestants’ mom died or something and then the sympathetic music plays and the judges are all like, “Awwwww.”

But the single best part is that when one episode ends and a champion is crowned, the next episode starts without you ever noticing. So you can just pass a whole day watching these strangers cook shit from a mystery box and then, without you noticing it, you end up alone in a gas station creating your own mystery box because TV and reality have become inseparable and you walk out with Flamin’ Hot Funyuns and cherry cola and I HAVE TO MAKE A BURGER AND MAINLINE FOOD NETWORK RIGHT THE FUCK NOW. 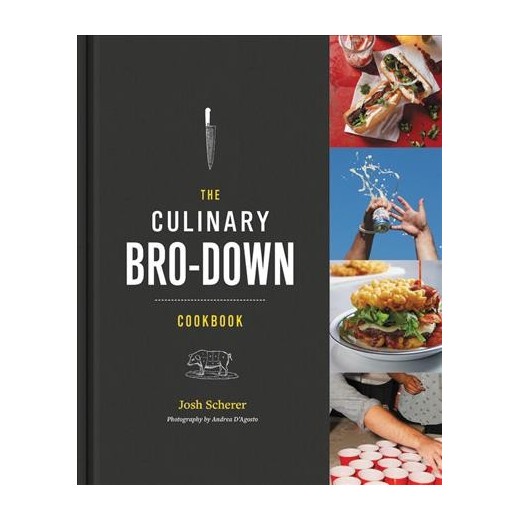 1. Start out by making some sweet, sweet, diabetic cherry cola BBQ sauce. Empty those 20 ounces of soda into a medium saucepot and throw it on high heat. You want the soda to come to a boil and reduce down by about three quarters. It should take about 12 minutes. Then add the ketchup, minced chipotles, paprika, cumin, onion powder, salt, and pepper. Stir, drop to medium, and continue to reduce for another 2 minutes, or until it looks like BBQ sauce.

2. Heat a large sauté pan on medium-high heat. Place the bacon strips in the pan. Fry them in their own fat until they’re looking all nice and crispy-like. Drain on paper towels.

3. Form the ground beef into ¼-pound patties and season liberally with salt. Ideally, you’d grill these over charcoal, but feel free to just throw them in a pan. It doesn’t really matter. Nothing really matters. We all die in the end. But first, burgers! Sear the burger patties over as high a heat as you can figure out how to make, then melt a slice of cheddar over each one.

4. Toast them buns. Schmear some cherry cola BBQ sauce on the bottom bun, throw on a burger, then some bacon, then a hefty layer of those onion ring proxies. Then—and this is imperative—absolutely drown that shit in more cherry cola BBQ sauce. Smash the burger down with your fist so it fits in your mouth. Eat with beer. And then eat again with more beer.