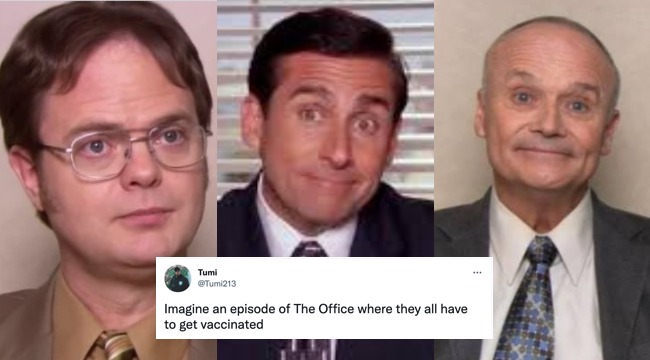 It’s been 3,021 days since NBC aired the final episode of The Office, and the mere fact that I’m editorializing about it a full eight years after Jim decided to pursue his dream of working in sports marketing is evidence of its rock solid legacy.

It’s probably best The Office escaped before the culture validated think pieces like 5 Episodes Of The Office That Are Totally Problematic and SEO-hungry blogs foamed at the keyboard to throw the beets out with the rain water.

Nine seasons and 201 episodes is an iconic run, but in a time when laughs are hard to come by, witnessing how the Dunder Mifflin Scranton office would unravel during the pandemic is a worthy thought exercise.

“ I signed everyone up to get the vaccine because I want everyone to be safe……… well almost everyone. I didnt get Toby an appointment because…… quite frankly……. He sucks” pic.twitter.com/4hns87sasb

Michael stages a closed-casket funeral for Toby to convince the office Toby passed away despite Michael using the opportunity to finally fire him.

“I sacrificed myself for the greater good of the office

I plan on giving everyone their first dose first thing tomorrow morning” pic.twitter.com/cHddL7Gcqe

Dwight fluctuates the price of the vaccine based on his relationship with co-workers. The vaccine is just an edible of beet juice and THC from Schrute Farms. The whole office gets zonked and Michael is tasked with figuring out how his office is going to pass the impending mandated drug test from corporate. Kevin polishes off an entire sheet cake.

“I ain’t getting no damn vaccine, if Covid is the only way I can get some paid days off then imma wait till I get it” pic.twitter.com/5XvVwk4A4O

Resentment grows within the office when it’s revealed who eclipsed the stimulus check salary threshold.

“It’s injustice! I tried to take Ember, Milky Way, Diane, Lumpy and all my other cats to get their shots and they said it’s not for animals. Can you believe that?!”

Interviewer: “What about your son?”

“What about my son?” pic.twitter.com/y1bAVYGhaO

Angela brings her nine cats into the office, passing them off as service animals. Toby, deathly allergic, starts sniffling and sneezing and Michael chains him to the radiator in the warehouse.

“Ryan said we couldn’t be together if I didn’t get the vaccine. He doesn’t want me putting him at risk. So I got it. He then tells me he didn’t get it and doesn’t want to put me at risk. Creed told me about a guy in Mexico who could get rid of it. Nothing can keep us apart.” pic.twitter.com/A9a3LbINED

Ryan is roped into wearing matching bedazzled masks Kelly knitted on their three-month Covid-versary. Todd Packer bullies him into submission.

“I saw this tiny thing that resembled a microchip at the dollar store so I purchased it along with fake blood and Pam is going to pretend to be taking that chip out of me in attempt to convince Dwight that I’m being tracked by the government” pic.twitter.com/yByT8fJpFW

An over-cautious Dwight wears a Stormtrooper mask to protect him from the office’s Patient Zero, who he makes various attempts at guessing. His plan backfires as Meredith is turned on by the mask and refuses to socially distance by making a move on Dwight, sexually.

*interviewing via Zoom* “There’s no way in hell I’m coming into the office with these people in the middle of a pandemic.” pic.twitter.com/s2lBboU3ts

As Oscar works from home, Creed uses a paper clip and an N95 mask to break into his desk and steal his valuables to pay for a homemade vaccine his buddy from ‘Nam is cooking up in his basement.

Justine texted me that she wouldn’t come over unless I got vaxxed.

So I texted her back “BTB”- bring that booty. My appointment’s at 3. pic.twitter.com/RqqCLxde3N

Michael Scott recruits Darryl, a trained singer, to lead an office version of ‘Imagine’ to raise money for coronavirus relief. Michael is actually raising money to keep the branch afloat after it was denied stimulus relief.

Michael constantly berates Kevin for being “high risk” because of his weight. Kevin ultimately decides to get really into Peloton during the pandemic and shows up to the office with a six pack and a lettuce-only diet.

Vaccine ? Of course I got some. Which one do you need ? pic.twitter.com/xgdtDcmQ0N

The Scranton office mandates working from home and it comes to light that Creed doesn’t have a home and has been living in a man-dug tunnel below the building.

“Well at first Ryan didn’t get it, and I thought it would be SO romantic if we both got covid and died together like the end of The Notebook, but then Britney Spears got vaccinated, so I did too. So now if Ryan gets covid and dies it’ll be just like A Walk to Remember instead” pic.twitter.com/Dt2oSoQQYJ

Kelly fakes a dire sickness to get Ryan’s attention. He steps over her on his way to the printer.

“The Schrute’s don’t need a vaccine. Generations of eating beets have made us immune to diseases. In fact my great-great grand father used bath in a mixture of beet juice and goats milk everyday and that’s how he made it past the Spanish flu. He lived to be 126” pic.twitter.com/blYhyGXAkb

“michael wants everyone to get the vaccine so that he can have his birthday party at the office. i was the only one that wasn’t invited. and the only one that’s vaccinated” pic.twitter.com/YeYYc783PU

Michael blows the candles out on his birthday cake and Tony reminds him that the virus spreads via liquid particles. Michael spits in his face.