The Perks Of Being A Pallbearer 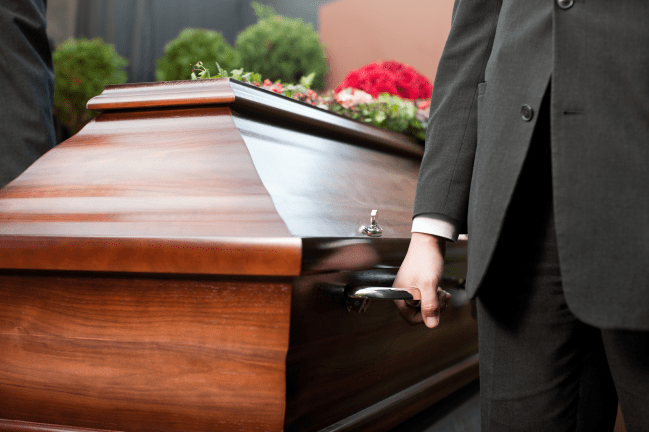 Wedding Crashers famously portrayed funerals as a cauldron of hormones. “Grief is nature’s most powerful aphrodisiac,” said the Will Ferrell character. That’s not really true though. Powderized deer antler, a product of the natural world, sends blood to the groin far quicker than a ceremony to remember the lost. Especially when the powder is cut with Viagra and inhaled. Either way, this isn’t about playing upon the heightened emotions of a funeral for sex; it’s about embracing the importance of the pallbearer position, and the perks that come with it.

Pallbearers are the groomsmen of funerals. You’re the VIP guest. You’ve been handpicked, not just for your proximity to the deceased but for your shoulder strength, how consistent your height is with the other three or five ‘bearers, and for how good you look in a dark suit. Most funeral planners don’t hire a photographer to document the festivities, but people take mental images. Memories are made at funerals. And a handsome pallbearer, especially one related to the person in the casket, can really remind the mourners of how good-looking the deceased was.

“He’s got his chin,” they’ll whisper, as the strapping pallbearer ambles mournfully down the aisle. Is that a tear wobbling at the edge of his piercing blue-green eye—the color of Caribbean waters? Is he wearing colored contacts? Goodness, he’s the perfect balance of stoic-yet-emotional. Just enough feeling to show us the depths of his heart, but not so overcome that he’s at risk of succumbing to his feelings, potentially dropping his handle, and dissolving into a puddle of tears as the remaining pallbearers try to rebalance their load.

I p-bore once. I was surprised to be asked. I think I was more of a strength pick, as they’d used up a lot of the sentimental picks on pretty weak dudes. I mean these guys would never get hired by UPS or even Circuit City. For my part, this funeral was at a time when I was really lifting consistently, and taking my meal prep seriously. Ha, I remember how poorly the suit fit. I couldn’t even button it in the front! But when you’re a pallbearer, you need that jacket open anyway. Nobody minds; they understand that the dress code rules are relaxed for those charged with carrying the coffin. Did I take advantage of that wiggle room? I guess the white ankle socks were a little… tone deaf. But I had come straight from leg day, and I forgot to pack dress socks. It only matters when you’re sitting down. And mostly, I drew attention while standing.

The guy who drives the hearse issues orders. He’s the crew chief, the union leader, and the head coach rolled into one. He positions the team around the casket to make sure there are no weak links. The ends are wear you place your studs. If you’re forced to work with a noodle-armed nephew, couch him in the middle. That’s where he’ll do the least harm, but at least he’ll feel important, little bitch that he is. I was an end, of course. I covered the blind side—the Michael Oher of grief.

If you ever get the nod to be a pallbearer, accept the role with humility and grace, but also with excitement and enthusiasm. A little showmanship goes a long way. Wear your best outfit. Practice setting your jaw in the mirror. Don’t wear sunglasses; you’re not in the secret service. If you get it right, you might just be the one they remember.