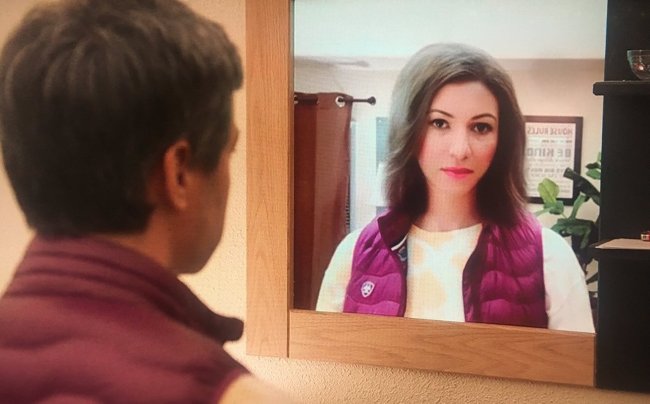 Following the conclusion of The Rehearsal‘s six-episode first season, fans of the utterly bizarre comedy (?) series took to Twitter to debate the man at its center: Nathan Fielder.

After the first season saw Fielder try to simulate raising a family, the consequences of his actions came to fruition in the finale as one of the child actors in the project, Remy, began believing that Fielder was *really* his Dad.

As a result, Fielder took the experiment to an even deeper, more-meta level that saw him do the entirety of The Rehearsal from the perspective of Remy’s mother, concluding in an almost Kubrickian final scene that saw Fielder — dressed as a woman, pretending to be the child actor’s mother — tell him that he’s actually his Dad.

“Wait, I thought you were my mom,” Liam, a different child actor playing Remy, confusedly says to Nathan as he breaks character.

Needless to say, both the finale and the first season as a whole left fans and critics alike wondering the same exact thing: is Nathan Fielder a genius or a madman?

Very glad Nathan Fielder chose to use his gifts for good. Lord only knows what he could’ve done as a supervillain. pic.twitter.com/aJW3jWHhLi

CRITICS: This is unethical.
DEFENDERS: You just don’t get it.

You say Nathan Fielder is insensitive to children. I say he's come a long way since commissioning a robotics team to design a "claw of shame" to remove his underwear in front of them if he can't get out of handcuffs in 90 seconds.

The Rehearsal is the most genius piece of television I’ve ever watched. What I just witnessed over the course of six episodes is so unique that I don’t even want to try to describe it because you will never see anything else like this. Nathan Fielder is one of a kind.

Six weeks ago I was crying laughing while Nathan Fielder secretly fed a man the answers for trivia questions and now The Rehearsal finale has me in my apartment like this: pic.twitter.com/XSBxZVo8Nm

I’m convinced that if I was on the Rehearsal, Nathan Fielder would have fallen in love with me and we would have fake raised the perfect fake child.

The Rehearsal is simultaneously the most hilarious and most bizarre show I’ve ever seen. Nathan Fielder is a dry comic genius and master destroyer of the fourth wall. Check it.

Gotta respect HBO for basically letting Nathan Fielder do whatever the fuck he wants because they know all people really want is to watch him be a weirdo.

A true enigma of a human being.#TheRehearsal

Prior to the release of the season one finale on Sunday, HBO announced that the series had been renewed for a second season.

“Nathan has sparked such a lively conversation with The Rehearsal,” Amy Gravitt, an Executive Vice President of Programming at HBO, said in a statement.

“We have no idea where season 2 will take us, and that is the delight of this boundary pushing show from a truly singular talent.”

All six episodes of The Rehearsal are currently streaming on HBO Max.