The Rock Doesn’t See A ‘Black Adam Vs. Superman’ Movie As The Ultimate Goal For DC (Exclusive) 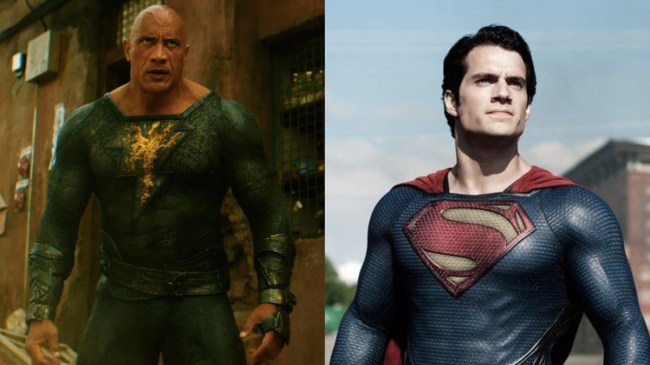 Clearly intent on pouring gas on the fire that are DC fans across the globe, The Rock has been overtly addressing what Henry Cavill’s potential return as Superman would mean to both the struggling DCEU franchise and its long-suffering fans in multiple interviews during the leadup to the release of Black Adam, which hits theaters this Friday.

Warning: this article includes spoilers for Black Adam but said spoilers also come directly from The Rock himself, so perhaps they aren’t spoilers at all.

One of those interviews came with BroBible’s very own Post-Credit Podcast and The Rock did provide some interesting insight into how exactly he sees the respective futures of Black Adam and the Man of Steel in the DCEU unfolding.

The Rock says that while a Black Adam vs. Superman movie could be cool, he ultimately believes it would just be a moment in service of telling a larger story

Eric Italiano: You’ve fielded endless questions about crossing over with Superman, so I’ll spare you. What I am curious about, though, is if there are any DC villains — already existing in the DCEU or otherwise — that you’d like to see Black Adam lay the smackdown on one day?

The Rock: Man, again, open the bible. Open the DC bible and it’s all right there. They are all right there. And now we’re in a great position where not only have we opened the DC bible, and cracked that sucker open, pulled out five new characters — the JSA and Black Adam — and Easter Eggs in Black Adam of human beings that aren’t superheroes (yet), so they’re all there. A lot of talk has been made of, ‘Is there going to be a Superman vs. Black Adam movie?’. That could be cool, but for me, that’s just the easy thing. That’s just a moment. We want to create a longtime storytelling culture with DC.

"A lot of talk has been made of a #Superman vs. #BlackAdam movie. That could be cool, but for me, that's just the easy thing. That's just a moment."

Given The Rock’s answer here, it’s clear that if and when Teth Adam and the Last Son of Krypton do feature in a movie together, they’ll ultimately put their differences aside in service of the greater good. And if that DOES happen, you can pencil it in to be a billion-dollar hit as The Rock is not only one of the surest bets in Hollywood these days, but DC fans have been clamoring for Cavill’s Superman to get a proper sequel for over a decade now.

Warner Bros. Discovery is in the early stages of developing what would effectively be #ManOfSteel2