The Rock Cleared Up Questions About His Alleged $31.8M T-Rex Skull Seen On The ‘Manningcast’ 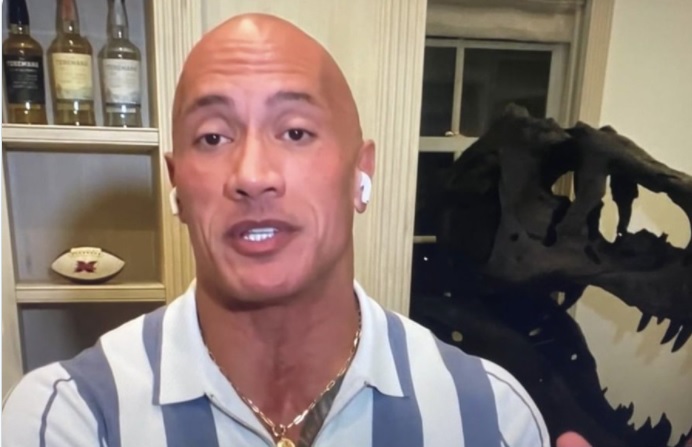 Dwayne ‘The Rock’ Johnson was a guest on ESPN’s ‘Manningcast’ with Peyton and Eli Manning. He was swigging straight from a bottle of his own Tereman Tequila brand on live TV but that’s not what caught the most attention. The Rock had a dang T-Rex skull in his office.

Many viewers quickly began to speculate if it was Stan, a T-Rex that was controversially purchased for $31.8 million by an unnamed buyer and never donated to a museum.

It is Stan the T-Rex, but not the infamous one sold for $31.8 million. The Rock took to Instagram to clear up the story. He is NOT the anonymous millionaire who purchased one of the most famous intact dinosaurs ever discovered and kept it private instead of inside a museum. Here’s what he had to say on Instagram (there’s some profanity in here):

After my LIVE interview on last night’s #ManningCast on @NFL’s Monday Night Football, there’s been tons of worldwide speculation in the world of science ~ that I am the “mystery buyer” of the original T-REX skull, known as STAN.

I am not the mystery buyer.

In my home office, this is my REPLICA CAST of STAN that I had made and purchased from my friends at The Black Hills Institute of Geological Research and Paleontological Excavations ⛰🦖
*swipe left and you’ll meet my team 👏🏾👏🏾 The original STAN was found in 1987, by amateur paleontologist, Stan Sacrison and finally excavated in 1992. In science, this T-REX skull is considered to be the most perfectly preserved skull ever found. Bones of this beautiful beast were perfectly pristine. This is why STAN is so extraordinary and special.

In 2020, STAN was auctioned and sold for $31.8 million to an anonymous buyer and never seen again. That buyer was not me. My love, respect, fascination and curiosity for paleontological & archeological science runs deep – and if I was the proud owner of the real STAN, I sure as hell wouldn’t keep him in my office 🤣🦖 I’d keep him in a museum, so the world could enjoy, study and learn from him.

* some cool paleontology history for you guys ~ based on anatomical research, STAN had some BRUTAL fights during his lifetime. Multiple bites and punctures from another T-Rex all over his skull as well as at the base of his skull that resulted in a broken neck, which STAN SURVIVED but his vertebrae were fused, resulted in loss of mobility and great pain for the rest of his life. STAN’s a fucking bad ass. And reminds me of myself. Not because I’m a bad ass, but because I’m 67 MILLION YEARS OLD TOO 😂🦖 Cheers to the Cretaceous Legend himself…

The fact that it's a replica is what makes it cool, actual fossils belong in museums to be studied and appreciated as a country's geological heritage. This cast is metal as hell without any ethical issues because it's not a specimen lost to the public and science

The T-Rex wasn’t chasing the Jeep, @TheRock was chasing the T-Rex. pic.twitter.com/7KwitgLyro

So glad it's the replica. Tragic that the real one is in private hands away from palaeontological research :'(

Love you Mr. The Rock

we STAN you sir

I'm really glad @TheRock didn't have anything to do with Stan getting sold to a private collector!
I'm a huge fan of you and natural history!
Thanks!!

The Rock is one of my favorite celebrities on the planet. He works 22 hours a day and still finds time to treat his fans in amazing ways. He really is a great guy.