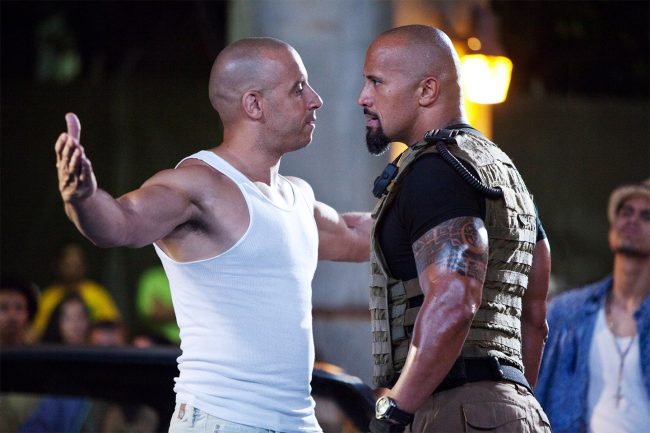 I’ve been rooting for Dwayne “The Rock” Jonhson for far longer than I’ve been supporting my favorite sports teams. Back in the late 90s and early 2000s, when I was about 7-10 years old, The Rock was the KING of the then-WWF — he was the most electrifying man in sports entertainment, after all. Frankly, I’m still not over Vince McMahon and Stone Cold Steve Austin screwing him out of the title at Wrestlemania X7.  And when he left the ring to pursue his Hollywood dreams, childhood me was heartbroken. Luckily, though, it meant that teenage and adult me would be able to witness his rise to the mountaintop of the entertainment industry.

It’s been two decades since The Rock transitioned from wrestling to acting and I’ve been rooting for him every step of the way — from the wonky CGI in The Mummy Returns to his Disney-esque era when he was starring in films such as Race to Witch Mountain and Tooth Fairy, from his introduction and subsequent scene-stealing in the Fast & Furious franchise to his long-awaited debut as Black Adam. I’ve been there for it all and will continue to be until he retires — if someone like The Rock is capable of retiring.

The purpose, though, of contextualizing this article with my lifelong fandom is to underline the fact that I will, within reason, always take The Rock’s side, particularly when it comes to his hilariously dominant feud with Vin Diesel, which has seen Johnson outfox and out-clown Diesel at every turn.

Johnson and Diesel, of course, have been beefing for a few years, likely due to the fact that Diesel, in his heart of hearts, realized that The Rock is the *true* star of the Fast franchise. While I don’t personally know Vin Diesel (obviously), he just strikes me as someone who believes fans are turning up to the Fast movie for HIM, thus resulting in the jealousy he felt when Johnson and Statham went off and went Hobbs & Shaw.

That years-old feud was reignited earlier this Summer when Diesel hilariously claimed that he gave Johnson “tough love” in order to make him a better actor. This particular quote struck a chord within the film community, as everyone generally accepts that Johnson is a far more compelling performer than Diesel.

Then, about a month later, The Rock responded to Diesel’s absurdities with a simple yet effective: “I laughed and I laughed hard. I think everyone had a laugh at that. And I’ll leave it at that.” The ole we’re-laughing-at-you-not-with-you. It was a consummate victory for The Rock in an argument he didn’t even want any part of.

Fast forward to today — about a month ahead of The Rock’s starring role in Netflix’s massive Red Notice alongside Ryan Reynolds and Gal Gadot — and the 49-year-old has given a sit-down interview with Vanity Fair that sees the topic of Diesel’s nonsense broached. And unsurprisingly, Johnson has, once again, simply yet effectively windmill 360° slam-dunked on Diesel’s face.

Johnson says that he and Diesel are “philosophically two different people, and we approach the business of moviemaking in two very different ways.” The faults he sees in Diesel seem pretty clear from this description he offers of his own contrasting philosophy: “It’s the philosophy of going into work every day. Looking at everybody as equal partners. And looking at the studio as equal partners. And looking at the crew, regardless of where you’re at, either on the call sheet or otherwise, as equal partners—with respect and with humility, and being respectful of the process and every other human being who is putting in just as much time, just as much hard work and sweat equity, if not more. And I think it’s always been important to me to always be straight up and look somebody in the eye. And if you say you’re going to do something, do it.”

Then, he clowned on the types of things Diesel will say about his overexaggerated view of his role in Hollywood:

Over time, Diesel has voiced his own oblique observations about this situation. He has put down their differences to them being two alpha males (Johnson: “Sounds like him to say that, sure”); characterized Johnson, perhaps slightly patronizingly, as Hollywood’s second “multicultural megastar” whom he’s proud to see following in his footsteps (Johnson: “He talks like that”); and said that “I protected Dwayne more than he’ll ever know…but he appreciates it. He knows he only has one big brother in the film world, and that’s me.” (Johnson: “I have one big brother and it’s my half brother. And that’s it.”)

“You know, I’ll tell you this,” he says of Diesel’s comments. “One part of me feels like there’s no way I would dignify any of that bullshit with an answer. But here’s the truth. I’ve been around the block a lot of times. Unlike him, I did not come from the world of theater. And, you know, I came up differently and was raised differently. And I came from a completely different culture and environment. And I go into every project giving it my all. And if I feel that there’s some things that need to be squared away and handled and taken care of, then I do it. And it’s just that simple. So when I read that, just like everybody else, I laughed. I laughed hard. We all laughed. And somewhere I’m sure Fellini is laughing too.”

Ah, yes, The Rock clowning on Vin Diesel… one of our favorite pastimes. Part of me hopes Diesel keeps running his mouth so Johnson can continue to put him in his place.

You can next see Johnson in Netflix’s Red Notice, which drops on November 12, and 2022’s Black Adam, which releases on July 29. As for Diesel, other than Fast & Furious — since those are the only movies he’s cast in these days — he can next be heard voicing Groot (who, remember, says all of three words — “I am Groot”) in next Spring’s Thor: Love and Thunder.