The Rock Says He Was Considered For The Role Of Willy Wonka, Which Sounds Equally Hilarious And Horrifying 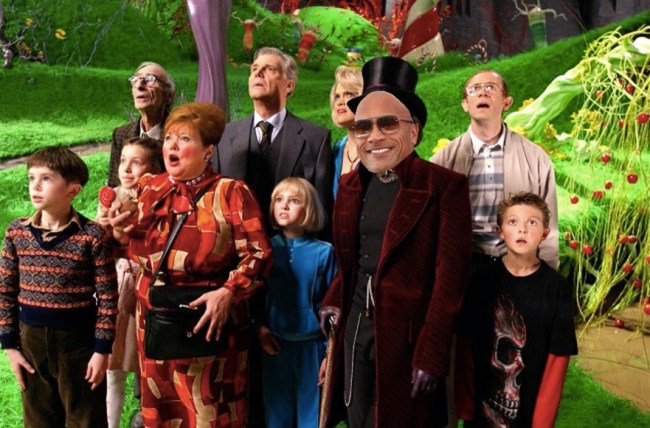 I’m in the camp that The Rock can do no wrong. I’m 27-years-old now, so I’ve been rooting for this dude for essentially two decades at this point, as he was, by far, my favorite wrestler from the WWF’s Attitude Era. To this day, I’m still angry about Vince McMahon and Stone Cold Steve Austin screwing The Rock out of the heavyweight title back at Wrestlemania 17.

You can imagine, then, how broken-hearted I was when The Rock decided to walk away from wrestling to pursue a career in acting. Obviously, The Rock made the right decision, as he’s now one of, if not the, most recognizable movie stars in the world.

The Rock’s acting career wasn’t always slated to be a guaranteed success, though, as The Rock, just like all people in all professions, went through some growing pains. In fact, those growing pains almost led him down a very different career path, as he recently revealed that Tim Burton had considered him for the role of Willy Wonka in his Charlie and the Chocolate Factory reboot.

This morning I introduced our babies to one of my all time fav films – Willy Wonka & the Chocolate Factory. They loved it and now fully expect me to deliver a room full of chocolate and candy. That’ll be my next project.

Some cool history – back in the early 2000’s, iconic director, Tim Burton had considered me to play Willy Wonka is his remake, Charlie and the Chocolate Factory. I remember thinking “HOLY SHIT, IM IN”. But that was many years ago when I was just starting out in Hollywood with no foundation of global box office strength or any real acting experience to even pull it off.The role, of course, went to Johnny Depp, who at that time was the biggest star in the world. The rest was history.

And down the road I went. The fact that Tim even considered me (albeit I’m sure he considered for all of 7 seconds:) sure meant a helluva lot to me as I was just breaking in to the business with no idea what the future had in store. I’ll always raise a glass  to the dreams that don’t come true, because sometimes they’re the best thing that never happened. [via Instagram]

As The Rock points out, the role ultimately went to Johnny Depp, who was perhaps at the height of his star power following the launch of the Pirates of the Caribbean franchise. While seeing The Rock in this sort of gonzo role would have been, uh, interesting, I also imagine it would have felt like a bad acid trip.