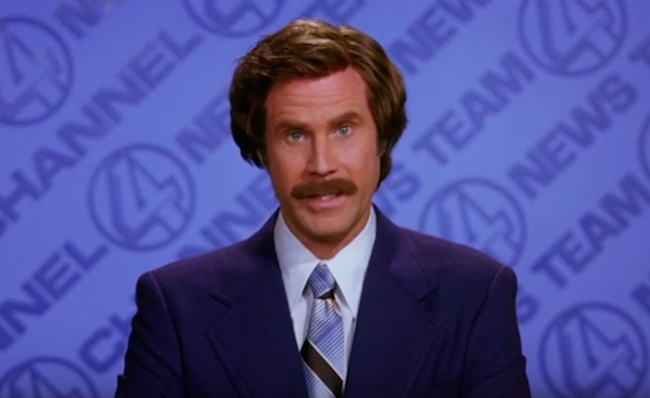 Will Ferrell started the new millennium on an absolute tear, following up an amazing performance in Zoolander with the legendary Old School before creating a modern holiday classic in the form of Elf.

These films helped Ferrell usher in a new era of comedy, and by the mid-2000s, he’d established himself as one of the funniest (if not the funniest) names in the business.

Elf was a tough act to follow but Ferrell somehow managed to outdo himself when he stepped into the title role in Anchorman: The Legend of Ron Burgundy, which may just be his magnum opus.

The infinitely quotable movie and its titular anchorman took the world by storm when it hit theaters in 2004 thanks to a never-ending stream of consistently funny jokes, a superb supporting cast, and Ron Burgundy’s iconic mustache.

Of course, it’s Ferrell’s performance that makes Anchorman the classic it is and I don’t know if he’ll ever be able to top it (all of you Stranger Than Fiction nerds can bite me).

Ferrell attempted to do so by riding the Anchorman wave and portraying over-the-top characters like Jackie Moon and the equally quotable Ricky Bobby but neither of them came close to being as iconic as the biggest deal in San Diego.

Ferrell would eventually pass the comedy torch to longtime collaborator Judd Apatow and his merry band of misfits, who came to dominate the comedy scene in the second half of the 2000s.

The two men reunited to bring Ron Burgundy back with a followup to Anchorman in 2013, which was actually pretty solid when compared to most comedy sequels that come out way too long after the original.

If the second movie left you wanting more Burgundy in your life, I have some good news: he’s following in the footsteps of everyone who’s helped gentrify a neighborhood by launching his own podcast.

According to Deadline, Ferrell will be reprising the role in the creatively titled The Ron Burgundy Podcast, which will be co-hosted by CNN’s Don Lemon.

Hello, @donlemon! It’s your good friend, Ron Burgundy. Don’t know if you heard, but I recently had my White House press credentials pulled. They accused me of eating too many hot dogs in the press break room.

The show’s 12 episodes will air on the iHeartRadio Podcast Network at some point early on in 2019 and that undetermined date can’t come soon enough.