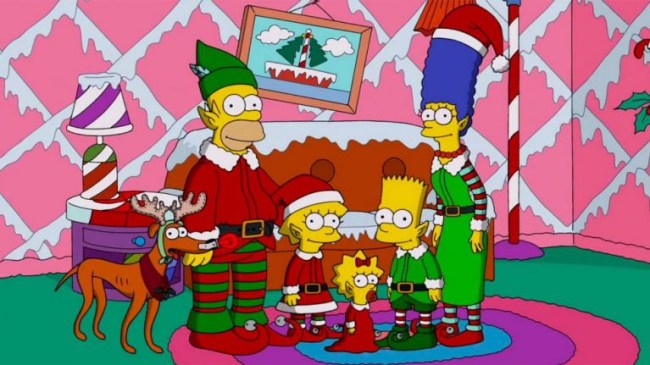 As if college football bowl season wasn’t already reason enough to park yourself on the couch for days on end this month, FXX has announced a two-week, record-breaking marathon of The Simpsons is coming to give you even less motivation to leave the comfort of your home as winter tightens its grip on the Northern Hemisphere.

The Simpsons Plus+Size Holiday Marathon (named to help promote the series’s move to Disney+ because synergy is fun) will begin on December 17—thirty years to the day after the first episode premiered—and run non-stop until New Year’s Eve. The marathon will consist of 661 episodes, as well as The Simpsons Movie and the Academy Award-winning short film The Longest Daycare.

With the Christmas season upon us, this is the perfect excuse to rewatch the episodes of The Simpsons inspired by the holiday. However, as far as I’m concerned, there are six of them that manage to stand out among all of the rest.

Simpsons Roasting On An Open Fire (1989) 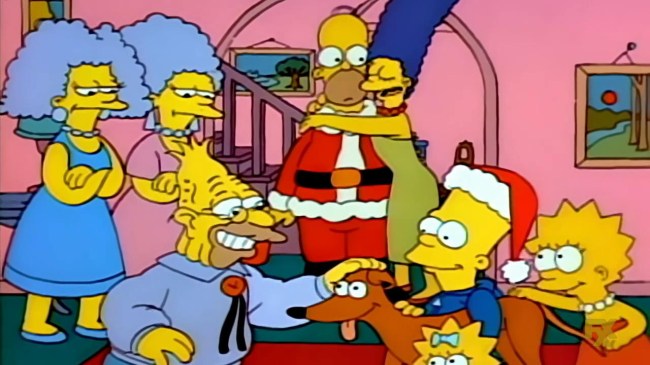 As I mentioned, the very first episode of The Simpsons aired on December 17, 1989 and just so happened to be a Christmas-inspired tale.

As the holidays approach, the Simpsons are relying on Homer’s Christmas bonus to help pay for the removal of a “Mother” tattoo that Bart has on his arm. However, thanks to the penny pinching of Homer’s boss Mr. Burns, the Christmas bonuses never come, forcing him to find another means of making some holiday cash: betting on greyhound racing.

Homer bets on 99-1 longshot “Santa’s Little Helper,” who loses the race but ultimately finds a new home with the Simpsons.

While it wasn’t the first episode produced, “Simpsons Roasting on an Open Fire” was the first one to air and quickly demonstrated that the show could be funny while simultaneously delivering stories with a lot of heart; a combination that has allowed the program to march along for more than three decades. 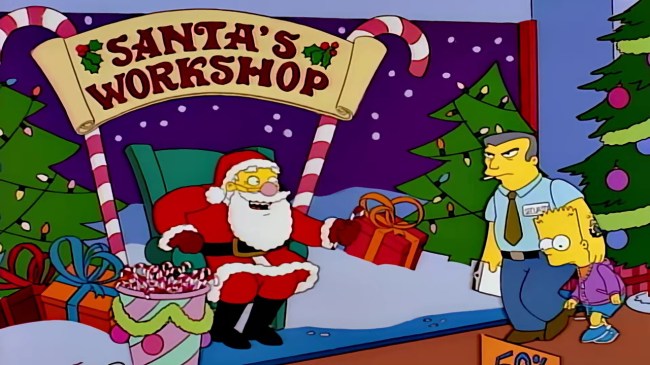 This is about as close to a Simpsons after school special as you’ll get.

A new video game called Bonestorm is all Bart wants for Christmas but he’s told it’s too expensive. After succumbing to peer pressure, he attempts to swipe a copy of the game for himself but is stopped by the store’s surly security guard, Don Brodka, who tells him to leave and never return.

Marge learns of Bart’s shoplifting endeavor and is heartbroken. Bart tries to make it up to her by getting his portrait taken and Marge reciprocates by letting him open a gift early, only instead of Bonestorm, it’s a copy of Lee Carvallo’s Putting Challenge.

This episode was written by showrunner Mike Scully, who based the story on personal experiences. It shows, and “Marge Be Not Proud” is one of the series’s more universally relatable episodes…especially if you’re prone to disappointing your parents. 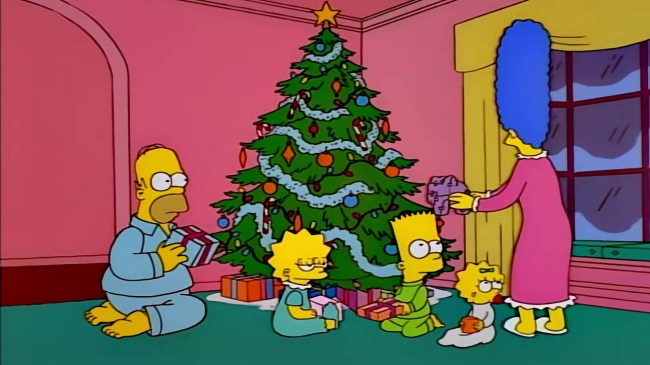 Every kid has tried to sneak downstairs on Christmas morning and this episode presents a worst-case scenario.

Bart wakes up early, and while playing with his new fire truck, he accidentally sprays water in an electrical socket, burning down the tree and engulfing the presents in flames. He hides the remnants under the snow and concocts a story about being robbed, which garners sympathy from the rest of Springfield. As a result, the Simpsons are given a new tree and $15,000 but the melted plastic Christmas tree is eventually discovered under the snow and the family is shunned for scamming the town.

It’s a great episode which through a series of events turns the Simpsons into the town pariahs. The end of “Miracle on Evergreen Terrace” offers a nice change of pace and differs from the more traditional warm holiday endings. 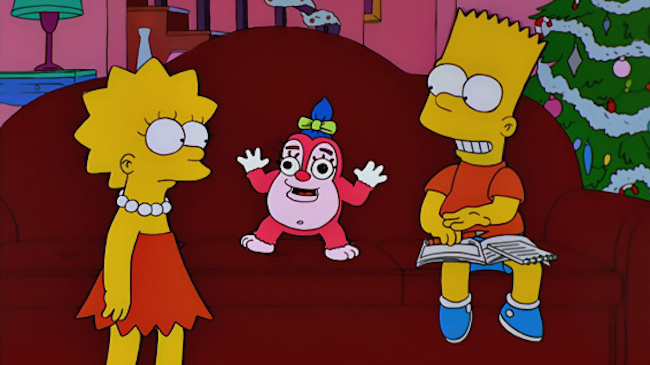 With a title that is a play on the O. Henry short story “Gift of The Magi,” this eleventh season episode lampoons the over-commercialization of Christmas.

Springfield Elementary falls on dire financial straits, forcing the sale of the school to a toy company, effectively turning the school and its students into one big, toy-making focus group. The resulting product is Funzo, a cross between Tickle Me Elmo and a Furby that is programmed to destroy other toys. Homer attempts to steal all of the Funzos in town and destroy them, but this plan is nearly thwarted by—of all people—Gary Coleman.

“Grift of the Magi” packs a strong satirical punch that seems to remain relevant twenty years after the episode’s premiere. 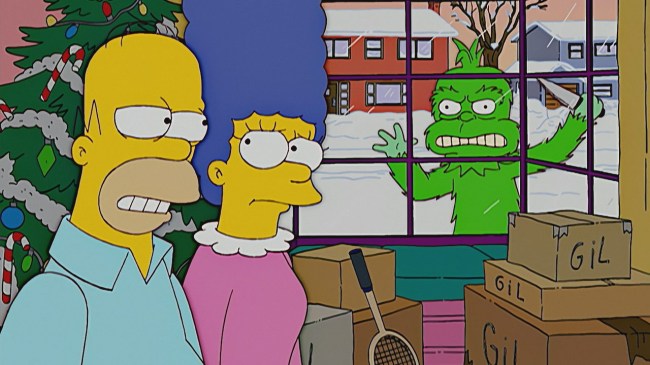 If you’re a Simpsons die-hard and always hoped for a Christmas-themed episode centered around one of the shows tertiary characters moving in with the family, I have some great news for you.

Gil Gunderson, the perpetually down on his luck salesman, makes a deal to sell the last Malibu Stacey playset to Lisa—much to the chagrin of the store’s owner, who fires him. Feeling sorry, Marge invites Gil to join the family for dinner on Christmas Eve and then to spend the night. Gil takes this as an invitation to permanently move in with the family, who feel too sorry for Ol’ Gil to ask him to leave.

This is a really funny episode that gives better insight into one character from the show’s expansive cast that isn’t heard from very often. The recurring gag where the Grumple (an obvious parody of the Grinch) stalks Homer after the two brawl at an ice-skating show in the first act is also one of the episode’s highlights. 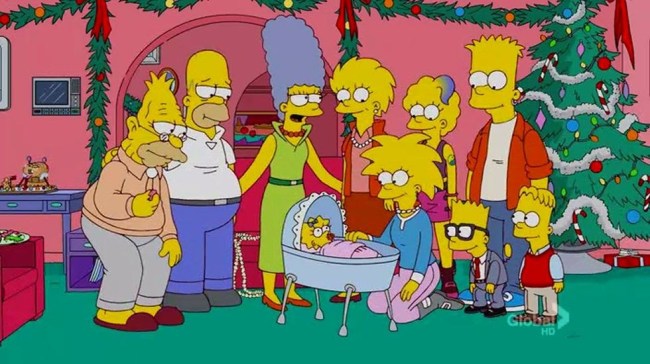 In the midst of tough negotiations with the show’s cast, it seemed as though The Simpsons would possibly be coming to an end. Showrunner Al Jean and the rest of the staff knew that they needed an episode that could serve as a fitting series finale. The result is “Holidays of Future Passed.”

The bulk of the episode takes place thirty years in the future where a grown-up Bart and Lisa are back home for Christmas, accompanied by their own children. Bart is divorced with two sons who are frustrated that he doesn’t spend more time with them, while Lisa is having difficulties with her teenage daughter, Zia, who is hooked on the “Ultranet,” the future’s highly-advanced successor to our paltry Internet.

It’s an episode that tells a story that’s both heartwarming and heart-wrenching. Had this been the final episode of The Simpsons, it would have ensured that the series would go down as one of the few that stuck the landing on its finale (I’m looking at you, Seinfeld and Dexter).