Explaining The New Villain In ‘The Snyder Cut’ 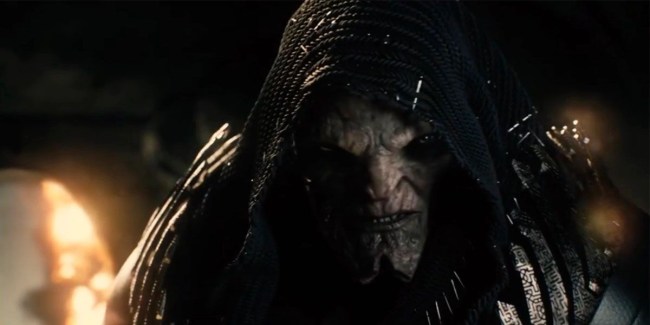 Over the weekend, the first trailer for the mythical Snyder Cut of Justice League dropped, and with it came a first-look at what appears to be an entirely new movie.

While the trailer didn’t reveal much of the plot, it did effectively establish that Snyder’s vision for Justice League was ultimately much different than the theatrical Frankenstein version that Joss Whedon gave audiences back in 2017. From song choice to color pallette, from cinematography to dialogue, if nothing else, The Snyder Cut is set to be an entirely new experience. Will that be a good experience? It’s too early to tell.

Now, even though the debut trailer was light on plot, there was some significant story reveals, particularly when it came to the villainous New Gods.

In the 2017 film, the only villain to appear was Steppenwolf, who looked like a PlayStation 2 character and was one of the worst parts in a truly awful movie. In this version, however, not only does an improved looking Steppenwolf appear, but so does Darkseid and his henchman DeSaad.

Created by Jack Kirby in 1971’s Forever People #2, DeSaad is a Darkseid’s master torturer and right-hand man. His name is a reference to French author Marquis De Sade, whose name the term sadism derived from. When Darkseid first encountered Desaad on New Genesis, the villain manipulated the youth into killing his pet bird and cat in a fit of rage. After that encounter, the young Desaad left for Apokolips and eventually joined Darkseid’s inner circle.

In terms of his powers, DeSaad has the same enhanced physiology as many of the New Gods. He is functionally immortal and can live for thousands upon thousands of years assuming that he doesn’t die in battle. DeSaad also has a high level of invulnerability and possesses super strength. Perhaps what DeSaad is most well-known for, though, are his brutal torture tactics, which often include psychological manipulation through telepathy. [via CBR]

The Snyder Cut, which will debut as a four-part miniseries before being cut into a feature film, will hit HBO Max sometime next year.