Three Months Of Salary For An Engagement Ring? How About Go F*ck Yourself? 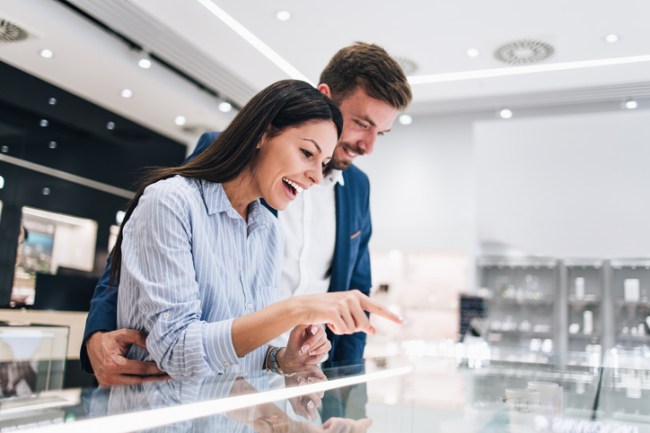 Engagement rings have become my cause de guerre. I’m thirty and well over half of my closest friends are either engaged or married, so these puppies seem to smack me in the face on Instagram every week now. Sure, I’m a hopeless romantic at heart. Notting Hill, No Strings Attached, You’ve Got Mail, When Marry Met Sally, the first 70 minutes of La La Land… if TV Guide magazine tells me any of these movies will be on TBS superstation, my night is booked. But when it comes to engagement rings, my mouth fills with acrid bile.

Engagement rings are a massive industry. Some people blame DeBeers; I blame women. Dangerous words in these delicate times, I know. But at some point, we need to realize that women are capable of being terrible people, just like men. That’s equality. That’s progress. To illustrate this thesis, we look to Instagram.

As wedding ring/engagement photos have proliferated across my Instagram feed, I’ve noticed a disturbing trend: many women post a photo of the ring and write “he did such a good job!” It’s a deflection, a humble downplay, like posting a shredded bikini pic while pretending to eat a hot dog with a caption like “empty calories, full stomach, can’t lose!” It’s meant to throw us off the scent of what it really is: a vagina-measuring contest. Because what’s really happening here is that she’s posting a photo of a commodity, the price of which we immediately start to estimate. And by we, I mostly mean other women, because they know the ring market.

An olive branch: if women just owned what they were doing with these posts, I’d applaud them for it. Remember ’90s hip hop  videos, where rappers would flex in backwards football jerseys as a strobe light hit their $60,000 Jesus piece, triggering epileptic fits for unmedicated children? It was a flex, and they relished it. You didn’t see Diddy brandishing his new spinning Sprewell pendant with a disclaimer like “my friend bought me this, and he knows me so well! Thanks dude!” Today, similarly, these ladies are flexing their new ice on Instagram; but they couch it with deferential words to their buyer fiancé. I would have nothing but respect for a ring post with a caption like “Look at the size of this fucking thing! He spent more than I thought he would!”

But that would be too obvious. That would violate the weird, unspoken decorum of ringstagramming. Thus, we’re left with these thinly-veiled humblebrags that credit some hapless fellow who simply brandished six credit cards and held his breath. Not only do these dudes probably not give a shit about credit, they’re not worthy of it! When it comes to rings, you know who actually did a good job? Sam and Frodo. The ’72 Dolphins. The Motorola Razr. Heidi Fleiss. The Undertaker. Barnum and Bailey. These are first ballot ring HOFers; not your Dave.

I have a family ring from my late grandmother. As a family, we believe in heirlooms and preserving memories. Also, my grandmother was a powerful wizard who learned the dark art of splitting her soul, a portion of which lives on in the horcrux I plan to give my lady someday. The ring is beautiful, too. It’s a far nicer ring than I could buy right now from Zales or Adam Sandler.

Still, I can’t help but wonder how an Instagram post of this ring will be received. Do I somehow love her less because I didn’t spend three months of my salary on it? Do I need to buy her something to supplement the ring, to emphasize this promise?

Maybe. Or maybe I’ll take the money I saved on a ring and put it towards something nice for myself. After all, I saved. I was fiscally responsible. Dare I say… I did such a good job.