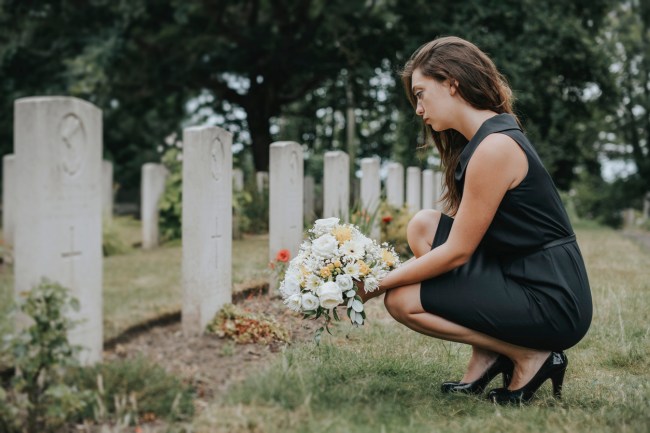 Ladies, are you thinking out of the pine box when it comes to dissuading other women from courting your man? Sure you may give your man hickies and inundate his social media with lovey posts to mark your territory, but is that enough? One woman took it to the extreme when she tried to push away her cheating boyfriend’s alleged mistress – his fake funeral. Modern problems require modern solutions.

HOW DID SHE PULL OFF A FAKE FUNERAL?

Thea Loveridge gave birth to the child of her boyfriend, which was supposed to be the highlight of her life. However, she soon found out that her boyfriend was cheating on her during the pregnancy with his ex-girlfriend. Shortly after the baby was born, the boyfriend was hauled off to jail.

The arrest happened so quickly that the man wasn’t able to take his cell phone, and it was left at home with Thea. The ex continually texted the guy’s phone, which Thea saw first hand. She used the opportunity to permanently put an end to the affair by figuratively putting her boyfriend to death.

Thea told the mistress that the guy died, and even went so far as to get his sister to push the fake death story and she held a staged funeral to end the affair. The mistress had no idea that her ex was sentenced to prison, according to the video on TikTok that went viral and has millions of views.

“She was messaging him trying to figure out where he was, all confused why he wasn’t talking to her,” Loveridge said on TikTok.

According to the Sun, the lie worked and the mistress eulogized her ex-boyfriend on Facebook.

RELATED: Men Who Wear This Are More Likely to Cheat, Says New Study

WHAT HAPPENED TO THE MISTRESS?

“One month tomorrow u left. U said goodbye to your demons. There was nothing anyone could do,” the mistress wrote. “This was ur peace. If I could have done more I would have but I know u left knowing I always had ur back and always loved you. Rip Scott. Forever my last love.”

That was three years ago, and the ex-gf still posts tributes to the “love of her life” on social media.

“This is pure evil. I absolutely LOVE it,” one commenter wrote.

If this was the Petty Olympics, this woman wins the gold medal.