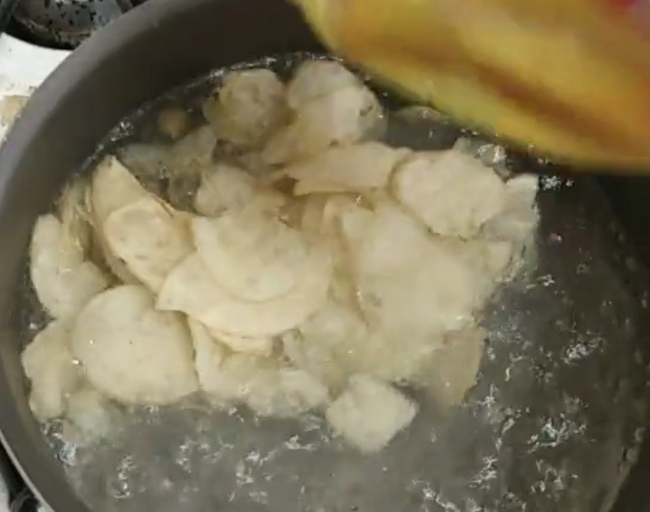 Mashed potatoes can be a pain in the arse to make. It takes so long to cook the rock-like root vegetables to be soft enough to mash. One TikTok user went viral for his signature and time-saving mashed potatoes recipe that uses Lay’s potato chips. However, not everyone was licking their lips over the unique recipe, especially a Michelin-starred chef.

Welcome to Eli’s Kitchen, a young gastronomic talent who has an eye for taking ordinary ingredients and making extraordinary culinary creations. The budding chef who goes by the handle of @elis_kitchen on TikTok, where he offers innovative recipes such as sweetened condensed meat and chocolate chip cookie chicken pot pie, clam hot dogs, and cereal potato chips.

But one of his visionary culinary creations struck a nerve with the internet – cheesy mashed potatoes made with soggy Lay’s potato chips. For Eli’s magical recipe, he boils salted water with a splash of vinegar, then tosses a bag of Lay’s original potato chips in. The TikTok chef drains the cloudy water into a jar, which he then chugs the shot. Eli, the self-described “most evil chef on tiktok,” adds shredded cheese to the oatmeal-like mixture. He sprinkles smoked paprika, which is key to get that wonderful savory flavor.

Then Eli eats a forkful of the congealed conglomeration, savors the potato chip mashed potatoes, and praises his cooking effort, “Delicious!”

The video racked up hundreds of thousands of views, and hundreds of disgusted comments, such as, “This feels illegal to watch.” One of the most distinguished critics of the potato chip amalgamation was Michelin-starred chef Brad Carter, who called Eli’s chef-d’oeuvre “ludicrous.”

“It looks like sludge and it’s obviously not good mashing all that frying oil into your food!” Carter, of Carters of Moseley in Birmingham, England, told Insider. “I’m a purist. A mash is a dish on its own, so it needs respect!”

Carter did give Eli a compliment, “Ten out of ten for lockdown innovation though, I must say.”