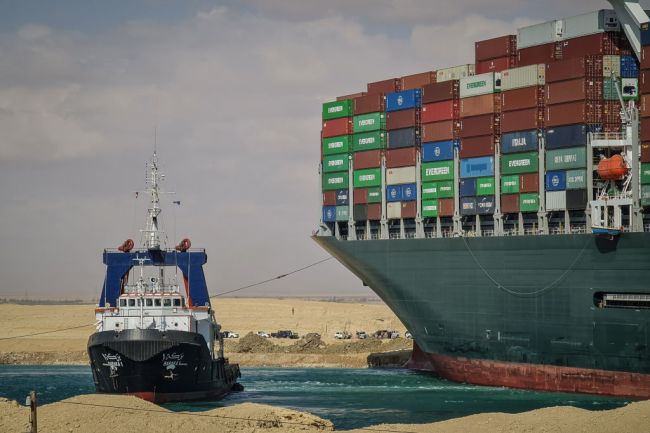 Traffic through the Suez Canal remains blocked for the fourth consecutive day on Friday and there has been very little progress in getting it unstuck. The Ever Given ran aground early on Tuesday morning after the ship lost power and the pilot lost any control, causing its bulbous bow to lodge itself firmly in the side of the canal. While its impact on the Global Supply Chain is vast, the memes that have stemmed from the fairly significant problem are incredible, and the images are wild.

Mind-blowing resolution in this satellite image of Ever Given in the #SuezCanal. Taken by Airbus-built Pléiades satellite from an altitude of 695 kilometers 🛰 pic.twitter.com/YhYk5Plzfl

A lovely hi-resolution image of a fuck-up so big that it can be seen from space.#evergreen #Suez #SuezCanal #SuezBLOCKED pic.twitter.com/NlnLgwtt12

Efforts to dislodge one of the world’s largest “mega-ship” cargo vessels have increased over the past few days and one of the teams in charge of the recovery operation said that it could take weeks, but an advisor to Egypt’s president offered a more optimistic timeline. Mohab Mamis, Egyptian President Abdel Fattah el-Sisi’s advisor on seaports and and the former chairman of the Suez Canal Authority, said on Thursday that navigation through the canal “will resume again within 48-72 hours, maximum.” The vessel’s owners, Japanese shipping company Shoei Kisen KK, gave an even quicker timeline, saying that the aim is to re-float the container by Saturday night local time.

No matter how long it ends up taking, the efforts to dig out the Ever Given will require the removal of about 19,600-26,000 cubic yards of sand, reaching a depth of 40 to 50 feet along the canal’s bank.

“In addition to the dredgers already on site a specialized suction dredger is now with the vessel and will shortly begin work. This dredger can shift 2,000 cubic meters of material every hour,” said Bernhard Schulte Shipmanagement, the technical manager of the Ever Given ship, in a statement.

While things remain positive for those who are overseeing much of the situation, many who are either indirectly involved or on the scene remain more cautious. CEO of Boskalis, the sister company of one of the salvage companies working to free the Ever Given, said that the ship was “stuck rock solid.”

A team of expert salvors from Dutch Smit Salvage and Japan’s Nippon Salvage are among those appointed to help the Suez Canal Authority re-float the ship, and the scene looked better on Friday evening than it did on Tuesday from a standpoint of resources.

However, as each day passes, the blockage continues to cost countries and companies a fortune while their trade is held up. The Suez Canal typically handles about $10 billion in cargo each day, and the global supply chains are already stretched to their limit due to COVID-19 restrictions.

What effect has the #SuezCanal blockage had?

This is a visualization made by @MarineTraffic’s data team from three days before the #Suez canal blockage till now.#SuezBlocked@GHatz21 pic.twitter.com/PgAg2lKiDd

One of the potential problems comes with another toilet paper shortage. There is a high demand for shipping containers and Suzano SA — the world’s largest producer of wood pulp, which is needed to make toilet paper — is warning that it could delay shipments to its producers. The company’s CEO Walter Schalka said that if the problem persists or worsens, a worldwide toilet paper shortage is nearly inevitable. Suzano has already had to push back March shipments to April.

This goes hand-in-hand with the Suez Canal situation. The supply for shipping containers was an issue prior to the Ever Given running aground, but the longer it is stuck, the bigger the problem becomes. The canal offers a direct path that allows ships to bypass the Horn of Africa. If the ships cannot go through the canal, which they cannot right now, the alternate route around the Horn adds at least a month to the voyage. For example, Suz to Amsterdam at 12 knots is just over 13 days through the canal, or 41 days via the Cape. If ships are taking an extra 30+ days to complete their routes, those shipping containers remain in use longer. If the shipping containers are in use longer, there are less in circulation at the ports. If there are less circulation at the ports, Suzano can not get its product to producers. If producers don’t have product, they can’t produce. If they can’t produce, there is no toilet paper. You get the idea… head to Walmart and stock up!

To put the entire situation in persepective, the Ever Given has nearly the exact same length as the Empire State Building is tall. To get the vessel floating, it will require nearly eight Olympic-sized pools worth of sand to be removed. It is a tedious process that could take weeks, but people involved in the efforts seem optimistic. We will see, but the 2/3 day estimation seems aggressive, seeing how the boat lies today.