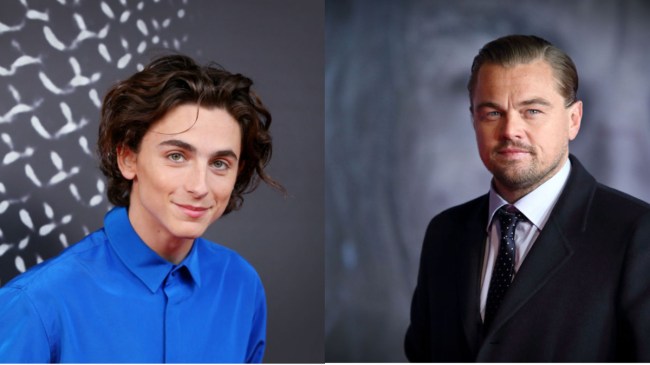 Widely considered to be the next great Hollywood A-list actor, it’s perhaps no surprise that Timothee Chalamet has sought advice from those who have walked this path before, such as Don’t Look Up co-star Leonardo DiCaprio.

During a recent interview with British Vogue, Chalamet revealed that it was, in fact, Leo who gave him that infamous “No hard drugs and no superhero movies” advice that went viral a few months back.

A baton was placed in his hand, passed down the decades by dint of James Dean and River Phoenix, David Cassidy and Leonardo DiCaprio: Chalamet became boyfriend to an entire generation. In fact, it was DiCaprio (in a moment of near-literal baton passing when they first met in 2018) who bequeathed Timmy his career rule: “No hard drugs and no superhero movies.” [via British Vogue]

While Chalamet hasn’t starred in a superhero film (yet), he did star in Dune and the upcoming sequel, which is a far more “blockbuster” project than Leo has ever been involved in.

Both Chalamet and Leo have massive projects lined up next year. Chalamet is set to star in Denis Villeneuve’s Dune: Part Two and as Willy Wonka in Paul King’s Wonka. As for Leo, he’ll be starring in Martin Scorsese’s Killers of the Flower Moon alongside Jesse Plemons, Robert De Niro, and Brendan Fraser.

RELATED: Leo DiCaprio Catches Brutal Stray Shot At The Emmys As Kenan Thompson Jokes Zendaya Is Too Old To Date Him