Here’s Who Timothy Olyphant Will Be Playing In ‘The Mandalorian’ 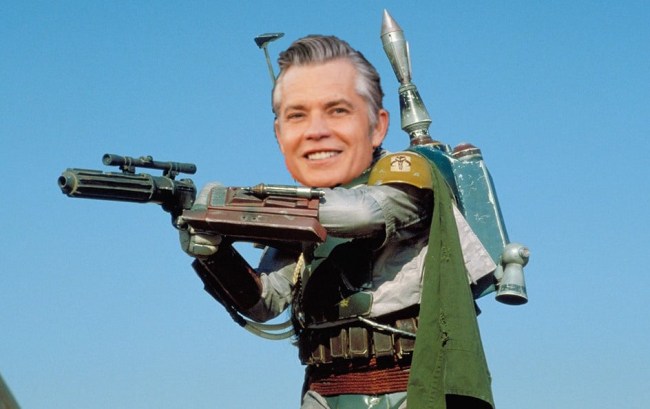 Late last week, we brought you the objectively awesome news that Emmy Award-nominated actor Timothy Olyphant would be joining the cast of The Mandalorian for the upcoming second season.

Olyphant isn’t the only big-name actor joining the cast for season two, as it’s been confirmed that Rosario Dawson is set to appear as longtime The Clone Wars fan-favorite Jedi Ahsoka Tano. Additionally, Temuera Morrison will be returning to portray the beloved Mandalorian gun-for-hire Boba Fett.

However, while Olyphant’s casting was announced, the character he’s playing was kept under wraps until now. According to a report from SlashFilm, Olyphant is set to don the iconic Boba Fett armor in season two, however, he’s not actually playing the legendary bounty hunter. Instead, Olyphant will be playing a character known as Cobb Vanth.

Our sources have confirmed to us that Olyphant filmed scenes wearing Boba Fett’s Mandalorian armor for the upcoming second season of The Mandalorian. That might sound confusing because earlier this month it was reported that Temuera Morrison, who originated the role of Jango Fett (Boba’s clone father), had been cast as Boba Fett. So what’s going on here?

If Morrison is playing the role of Boba Fett, then Timothy Olyphant is playing an enigmatic character named Cobb Vanth. Introduced in Chuck Wendig’s Aftermath book series, Vanth is the self-appointed sheriff of the Tatooine-based settlement Freetown. He wears a mysterious set of Mandalorian armor that was acquired from Jawas who scavenged the wreckage of Jabba the Hutt’s sail barge shortly after the events of Return of the Jedi. As you may recall, that was the site of a battle where Boba Fett was thrown into the Sarlacc Pit on Tatooine’s Dune Sea. It’s assumed that the Mandalorian armor purchased by Vanth is none other than the infamous green armor formerly worn by one of the galaxy’s most notorious bounty hunters, Boba Fett. [via SlashFilm]

As the official Star Wars Fandom states, Cobb Vanth — who is best known for his appearances in the Aftermath novels — is a human and former slave that is “believed to have worn Boba’s armor as he served as a sheriff on Tatooine.”

The Mandalorian is one of the few Hollywood productions not to be delayed by our current global situation, as filming of season two concluded at the beginning of March. At this time, season two of The Mandalorian remains on schedule to premiere on Disney+ in October.