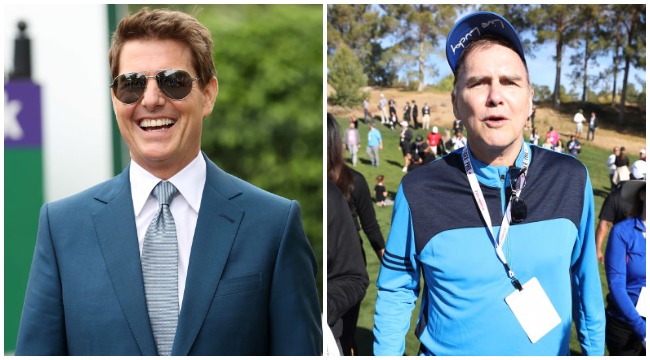 In the hours following Norm MacDonald’s death, Anthony Jeselnik poetically tweeted: “Battling cancer for 9 years without telling anyone is the most Norm Macdonald shit ever.”

When the culture collectively went down the Norm YouTube rabbit hole, some were convinced Norm planted a brilliant posthumous punchline in an offhanded joke after his diagnosis, which would be Extremely Norm.

Welp, as evidenced in Saturday night’s Game 2 of the NLDS, our imaginations simply could not grasp the incalculable artistry of Norm MacDonald because the man seemingly traded in his sweatpants and hoodie to morph into the most successful actor of our generation.

“Tom Cruise,” whose been the butt of a few of Norm’s Weekend Update jokes, showed up to Oracle Park to watch the Dodgers trounce the Giants 9-2 to even the series. Many on the internet made a point of his “puffy” appearance, but if I look this good at 59 years old, I must’ve given up every vice I currently rely on to be happy.

norm macdonald faked his own death to murder tom cruise and assume his life pic.twitter.com/Te3AIQjqST

Norm Macdonald’s ghost has taken over Tom Cruise. Only god knows what this entails https://t.co/qeM33OjQYW

A man said to be Tom Cruise is introduced on the video scoreboard. I'm not 100% sure it was him. Dude looked like a cross between Tom Cruise and Norm Macdonald.

Until I’m shown contradictory evidence, I choose to believe that Norm MacDonald is now living life as Tom Cruise and the real Tom Cruise has been taken prisoner by David Miscavige.