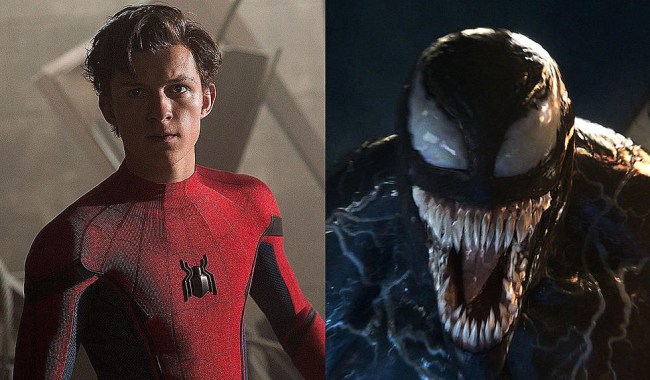 Just last week, in an effort to soften the blow of the news that the film was being delayed almost nine months, Sony announced that the sequel to 2018’s Venom would be titled Venom: Let There Be Carnage.

Similar to the original movie itself, the title is so bad that it’s actually almost good, as it forces me to simply respect the franchise’s commitment to outrageousness.

It’ll certainly be interesting to see just how far in the “Venom” direction the sequel goes, as it’s expected to begin introducing Spider-Man into Eddie Brock’s world, thus merging Sony’s recently-named “Spider-Man Universe of Characters” with the Marvel Cinematic Universe.”

Until now, most fans assumed that Woody Harrelson’s Carnage would be the primary villain in the film, with Tom Holland’s friendly neighborhood Spider-Man making a brief appearance in a cameo or a post-credit scene.

However, after looking at these since-deleted promotional images that were posted to Tom Hardy’s social media, it appears that Spidey may be more involved than we thought.

While I’ve largely and generally been out on Sony’s Spider-Man Universe of Characters (sigh, such a ridiculous name), it will be a treat to finally see Spider-Man and Venom share the screen, as the first attempt in 2007’s Spider-Man 3 was an unmitigated disaster. With Disney and Marvel Studios now involved, the second time around should finally be able to deliver what fans are hoping to see between the two iconic web-spinning, wall-crawling rivals.

Venom: Let There Be Carnage — which was originally set to hit movie theaters in the United States on October 2 — will now be released on June 25, 2021.