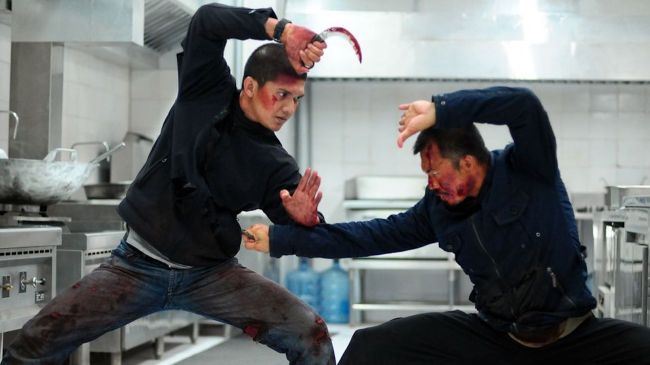 The first time watching The Raid is one of the greatest movie-watching experiences of my life. I was in college at Rutgers University and it was my first year living at the frat house with all my buddies. When it comes to college experiences that you set out to have, living under one roof with 20 of your best friends was the one. When I think back on my college years, these are the moments I think of.

So, there we were, all crammed into my buddy Mike’s room — the stickiest of all the house’s rooms because it was one of the few that had a bar in it. Yes, a full bar. This is back in the early 2010s when frats, although on their last legs, were allowed to do things like install furniture (does a bar count as furniture?) that specifically facilitates binge-drinking. I’m relatively sure it was a Sunday, as there are few circumstances that would cause a group-movie-watching other than a mass hangover from a weekend of partying. Obviously, similar to most frat houses, one of our roommates was a drug dealer, meaning we were rolling up blunts like an assembly line to watch an Indonesian action film that none of us had ever seen — a film called The Raid. If memory serves me correctly, I believe I was actually the one to suggest the film, as I remember seeing it near the top of countless “best action movie” lists on IMDB and Reddit and such.

As it would turn out, those random internet lists were right, as The Raid, and its expansive sequel, are *without question* two of the best action films I’ve ever seen. The first time you see The Raid is a unique movie-watching experience in and of itself, let alone when you do so with 15 other guys running on Bud Light, burger grease, and average weed.

The reason that I took you in this time machine back to 2013 Rutgers is to illustrate just how long I’ve been following the career of Gareth Evans, the director of The Raid franchise, and how long I’ve been waiting for him to make a movie like *this*: according to Variety, Timothy Olyphant has been cast to star alongside Tom Hardy in his upcoming Netflix action-thriller Havoc.

Havoc takes place after a drug deal gone wrong and centers on a bruised detective who must fight his way through a criminal underworld to rescue a politician’s estranged son, while unraveling a deep web of corruption and conspiracy that ensnares his entire city [via Variety].

It’s been a long time coming for Evans, who hasn’t quite yet broken into the mainstream as I’ve long hoped he would. Havoc is certainly a step in the right direction as it’s the first feature that the director will create for Netflix over the next several years as a result of their recently announced partnership.