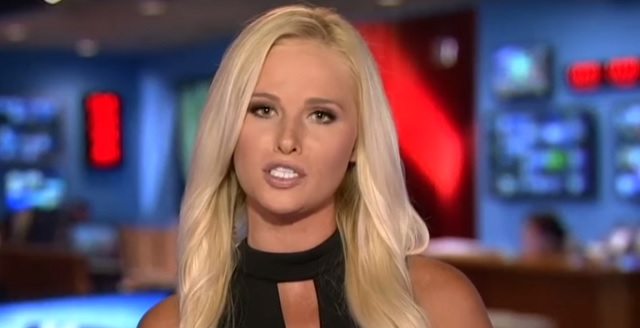 Over the Christmas weekend a hilarious doctored photo of conservative commentator Tomi Lahren discussing the fictitious holiday “Festivus” made the rounds on the Internet. The photo, which was obviously fake, depicted Lahren on a Fox News segment with a breaking news alert scroll on the bottom that read “Tomi: Obama Created Festivus To Destroy Christmas.”

The photoshop hilariously references Frank Costanza’s fictitious “Festivus” holiday that was featured on “Seinfeld” in 1997.

“Many Christmases ago, I went to buy a doll for my son,”. “I reached for the last one they had, but so did another man. As I rained blows upon him, I realized there had to be another way…A new holiday was born: A Festivus for the rest of us!”

The fake “Festivus” image of Lahren appeared to fool many on the internet including Seinfeld cast member Jason Alexander. The fake photo seemed to really get under Lahren’s skin who went on to blast several twitter users for sharing it on the social media site.

You idiots think this is real? Have you nothing better to do than photoshop fake news? Get a hobby. Go for a walk. Do something. Good Lord. https://t.co/tAVh7Vy3n0

You idiots think this is real? Have you nothing better to do than photoshop fake news? Get a hobby. Go for a walk. Do something. Good Lord. https://t.co/tAVh7Vy3n0

Does it not bother you to circulate a photoshopped piece of FAKE NEWS? Classy. https://t.co/hvwdgwPkd2

lol i photoshoped this https://t.co/kg0oZwZW8J

The Tomi Lahren festivus picture is fake but it says so much about her that people thought it was real.

My fav part of "Tomi Lahren says Obama created Festivus" is how many ppl found it so utterly believable.

I gotta give it to @Seinfeld2000, I would kill to personally make @TomiLahren this upset pic.twitter.com/1yZTQqvDXJ

Ok, so can we now all agree that this woman is either batshit crazy or that she will say anything for money? https://t.co/XoIjz2ymI5

For someone with such scorching hot takes, Lahren has some pretty thin skin.