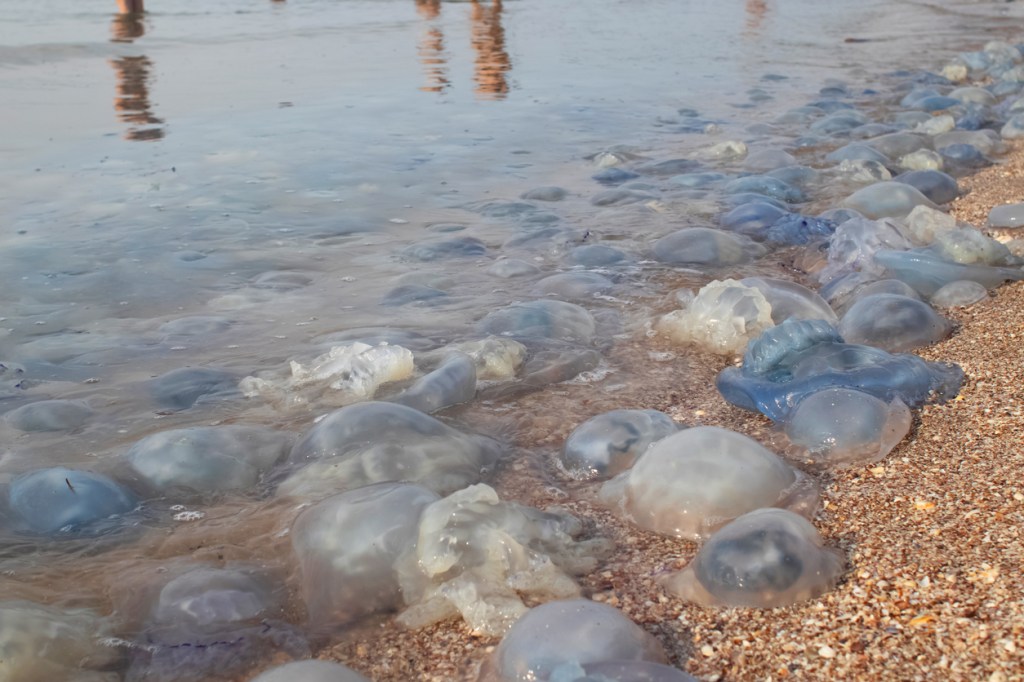 Human beings are believed to have primal fears of spiders, snakes, and wolves. We are thought to be born with a healthy fear of these creatures that can end us in an instant if we let our guards down. And while I’ve never heard of anyone suggesting that we have a primal fear of jellyfish I feel like they should be added to the list. Because has anyone ever in the history of mankind seen a jellyfish and thought ‘that looks super safe to touch’? The answer is ‘no’.

Seeing large numbers of jellyfish is unsettling. I remember being stuck in a sea of small red jellyfish in The Bahamas once. I was on a JetSki with a friend and the school of jellies was so big it felt like we couldn’t escape them no matter which direction we went until eventually, they disappeared. But it was a very primal fear, that there was no escape.

That has to be how the residents of Trieste, Italy feel right about now. Trieste is a port city on the Gulf of Trieste in the northeast corner of Italy that borders Slovenia. Recent footage from the harbor in Trieste show that tens of thousands of huge jellyfish have shown up and taken over the place. Swimming is out of the question, for now.

This isn’t the first time these jellies have taken over Trieste and a report in Reuters claims some scientists believe it could be tied to changes in sea temperature and wind patterns.

What species of jellyfish is that?!

The species of jellies in Trieste are ‘rhizostoma pulmo’ jellyfish which are often referred to as ‘barrel jellyfish’. They’re found in the Northern Atlantic Ocean, Adriatic Sea, Mediterranean Sea, Black Sea, and Sea of Azov. They’re also found off of South Africa.

I know what everyone’s wondering, what’s that sting like? Wikipedia describes them as being ‘moderately venomous’ but not as deadly as other species of jellies. And the sting causes a burning sensation which can lead to dermatitis and ulcers but they don’t typically pose a lethal threat to humans.

The Jellies Showed Up Last Year Too!

The video(s) above from Inside Edition claim this is the second year in a row that this species of jelly has shown up en masse to Trieste, the capital city of Italy’s Friuli Venezia Giulia region in the northeast. Looking at Trieste on Google Maps it is at the tippy top of the Adriatic Sea.

It’s hard to imagine how the jellyfish get all the way up there but if the winds are right and pushing them at that angle then the jellies would be stuck there until the winds shifted and pushed them back out to sea. I’ve never been to Trieste but after seeing some photographs of the Italian port city on Instagram I might have to add it to my list of cities to visit, jellyfish or not.