An Alarming Number Of College Students Across The U.S. Are Overdosing – On Tuna 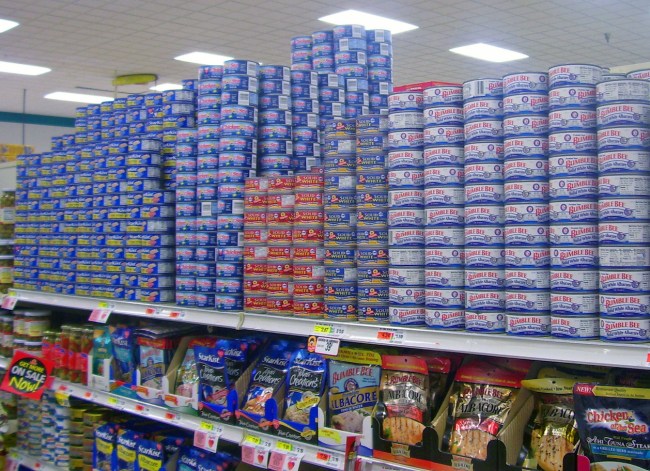 Gather round all you fish-eating fiends, while we dole out some real-deal science that almost seems too ridiculous to be true.

Let us begin by saying drop the tuna can and step away from the kitchen, like right now.

While parents are often concerned that their kids are going to become gutter drunks once they are turned loose on campus, it turns out that the real horror of the college years is not so much in the depravity that students choose to embrace.

What’s really going to fuck them up is all of the tuna they eat.

Researchers at the University of California, Santa Cruz, say that many students are consuming the Chicken of the Sea in such high quantities that they could be injuring their bodies.

The results of the study, which were published in the latest journal Society of Environmental Toxicology and Chemistry, shows that 54 percent of students are now eating tuna at least three times a week.

And this love affair for canned fish could prove detrimental to their health, researchers said, as it contains the toxic heavy metal, Mercury.

Too much of it and shit’s going to hit the fan.

“I’ve been dumbfounded when students have told me they eat tuna every day,” Lead researcher Myra Finkelstein said in a statement. “Their lack of knowledge about the risk of exposure to mercury is surprising.”

But canned tuna is one of those non-perishable staples that allow students to eat healthy on a budget.

Not only is this stuff packed with omega-3 fatty acids (helping to ward off heart disease), protein, selenium and Vitamin D, a cash-poor bastard can typically get his hands on it for less than a dollar a can.

Even top of the line cuts like Albacore are still relatively affordable, so it makes perfect sense that young, presumably health-conscious people have gravitated towards canned sea meat to keep themselves running strong. But too much of a good thing always comes with repercussions.

As far as tuna is concerned, the most common is mercury poisoning.

While our bodies can metabolize this heavy metal in small amounts, an overdose of it, so to speak, holds enough power to affect brain function and put the central nervous system on the fritz.

Someone in the early stages of mercury poisoning might endure numbness in their fingers and toes, and they might even find that their coordination is slightly off track, as well.

Additionally, people who get too much mercury in their diets might also experience memory loss, trouble with vision (blindness), and even tremors.

And you thought it was just the alcoholism giving you the shakes, didn’t you?

But the real hardcore tuna-tic can really fuck himself up beyond repair, as extremely high doses of mercury can destroy the kidneys, cause respiratory failure and even death.

So yeah, we now live in a world where the basic tuna sandwich is just another figment of treachery put here to destroy us.

So, how does a man know just how much tuna he can eat without getting finned? Well, that’s the trick.

It seems that no one really has a clue at what level mercury goes from safe to problematic.

There are just too many factors that come into play. A person’s weight, their overall response to mercury, and the type of tuna, all play a role in this equation.

For most men, though, eating tuna daily may not cause any problems, U.S. Food and Drug Administration (FDA) spokesperson Lauren Sucher told Men’s Health. Yet, “some men could experience symptoms of mercury toxicity from eating the same amount,” she added.

Still, the FDA recommends that a person weighing 150 lbs. or more should eat no more than one can of tuna every nine days. That is unless it is the light variation. Then, three cans per week are safe, according to the Environmental Protection Agency.

It should be pointed out, however, that the highest risk for mercury-related health issues is in pregnant women and young children.

Most healthy men should be able to eat reasonable amounts of tuna without finding themselves nailed to the cross by mercury poisoning.

Even researchers associated with the latest study admit that most people who eat a lot of tuna are not likely to be struck gravely ill. It’s not like college campuses across the country are on the verge of being consumed by tuna zombies.

“It doesn’t necessarily mean that they would be experiencing toxic effects, but it’s a level at which it’s recommended to try to lower your mercury exposure,” Finkelstein said.

Nevertheless, we’re not taking any chances. We’ll be packing a peanut butter sandwich in our lunch from here on out.