10 Under-The-Radar Things You Should Be Watching Right Now 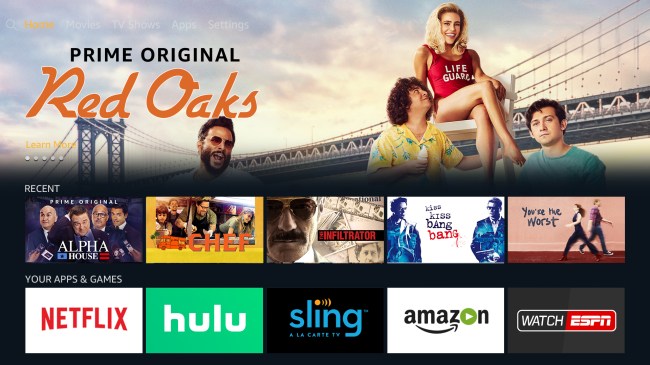 Praise the A/V forces-that-be for the power that streaming has bestowed upon us all. More specifically, thank goodness for Amazon Fire TV and the endless streaming entertainment options.

The amount of shows and movies available to stream with Fire TV can easily be overwhelming. That’s exactly why we made this list — Consider it a guide to the must-see shows and movies on your Fire TV.

Whether these shows and movies are underrated, under-promoted, or just relatively unknown – they’ve managed to sneak under the cultural radar for too many. But trust us, you do not want to miss them.

Red Oaks is a coming-of-age comedy series based in a New Jersey town during the Summer of 1985. The show’s protagonist is David Meyers, a college-aged lad that works as the assistant tennis pro at the Red Oaks Country Club. David is struggling to pick a profession and path for his future as he balances the input and pressures of club members, family, and friends who try to make the decision for him.

It’s a funny show with witty writing, great acting, and all the sex, drugs, and synths you’ve come to expect from a show based in the 1980s. The show just released its 3rd and final season, so it’s super bingable.

Bryan Cranston’s best performance in a drug related story… that isn’t titled Breaking Bad. All joking aside, The Infiltrator is a great Warner Brothers film based on a badass true story about a U.S. Customs agent that went undercover in the 1980s to bust Pablo Escobar’s money-laundering organization.

This all-star cast rocks a script written by director Brad Furman’s (The Lincoln Lawyer) mother, Ellen Brown Furman. The 2016 comedy-action drama is a great watch for anyone who prefers to enjoy movies from their couch instead of a theater.

The Gallaghers are back at it again. If you haven’t been a fan of SHOWTIME’s classic, it’s better late than never to jump into the series.

Shameless is the story of a struggling family living in the South Side of Chicago, an alcoholic father comes-and-goes as the eldest daughter raises the five younger children. The show’s balance of comedy, drama, character development, awkwardness, betrayal, and unpredictability is balanced like a unicyclist balances plates through a circus as elephants play polo and it rains fire. An anxiety ridden storytelling style that is nothing short of hauntingly beautiful.

You’re The Worst is very much a personal favorite. It’s about to wrap a fourth season and continues, in my opinion, to be one of the most underrated shows on TV. Luckily, it can become one of your most appreciated shows to stream.

You’re The Worst is a self-described modern love story but it’s really the story of modern life and development. It’s a LA-based story starring Jimmy, a British-American author and Gretchen, a publicist for an up-and-coming hip-hop group and their messy, selfish, and relatable relationship that forms from alcoholism and stubbornness.

In all seriousness, You’re The Worst tells a story through character development that embraces themes like depression, PTSD, alcoholism, self-doubt, and failure all through a lens that is relatable, respectable, and entertaining without ever feeling any sense of guilt or “laughing at” mentality. Of course, it uses light hearted story drivers to keep viewers committed to the characters through their never-ending ups and downs. I promise you, you’ll laugh and feel your heart drop just about every episode.

Jon Favreau makes HIT AFTER HIT AFTER HIT. That’s the long and short of it. From his days of Swingers to Iron Man to this, his passion project. Favreau wrote, co-produced, directed, and starred in Chef; the story of a disgruntled and under-challenged chef that causes his own unemployment, leading to a journey of self discovery.

This cast is second to absolutely none — Favreau is joined by Sofía Vergara, John Leguizamo, Scarlett Johansson, Oliver Platt, Bobby Cannavale, Dustin Hoffman, and Robert Downey Jr. If you like performances from big time actors but stories fueled by artistic storytelling, look no further.

6. The Man In The High Castle

Based on Philip K. Dick’s award-winning novel, Amazon’s The Man In The High Castle takes place in a world that exists when the Allied Powers failed to win World War II. As a result, Germany and Japan rule the United States.

As you can imagine, some Americans feel that the Allies should have won and the world is not right in its current form. Double-agents, conspiracy, secret meetings, and much more drive this storyline that keeps you watching episode after episode.

Black Mirror is different from every other show on this list and, likely, different from most shows you’ve ever seen. Black Mirror is an anthology series that revolves around the darker side of humanity and its relationship with technology. Every episode is a unique story, each with new protagonists and themes.

I’m not going to lie to you, watching Black Mirror is an emotional and mental thrill ride. However, each episode’s story will have you on edge and completely enthralled. From beautiful cinematography to award-winning performances, Black Mirror chews you up then spits you out into a world where every decision and habit seems slightly more vulnerable to analysis and investigation.

Alpha House is the Veep of a generation that prefers political cartoons over witty GIFs. Having said that, its writing and performances make it a great laugh for anyone.

Alpha House is a comedic take on four legislators who shared a row of houses in D.C. The four Senators live the politician life of doing as little work as possible while enjoying the nightlife and extracurriculars their constituents would be proud of… well, not really but it’s all through a scope of witty, political satire.

From 2005 until the day Baby Driver was released, one film held the title of worst title ever: Kiss Kiss Bang Bang. However, the title to enjoyment ratio of this movie is incalculable.

Do yourself a favor, look past the awful name and look at the quality of the film. For starters, it stars Robert Downey Jr. and Val Kilmer (idea alert: Iron Man vs. Batman) in a witty and thought provoking comedy-drama.

Kiss Kiss Bang Bang was distributed by Warner Brothers and written and directed by Shane Black, the same mind that wrote Lethal Weapon, Lethal Weapon 2, and The Nice Guys (one of my favorite movies of 2016). Black takes Brett Halliday’s novel Bodies Are Where You Find Them and expands on the story while translating the novel into a witty, vocal delivery-driven style of comedy.

HBO’s Bored To Death might be the most underrated comedy in HBO’s history of hits.

Bored To Death shares the escapades of Jonathan Ames (Jason Schwartzman), a Brooklyn novelist whose writers block leads him to start moonlighting as an unlicensed detective in New York City. Each episode is a ridiculous and unnecessarily dangerous case that leads Jonathan around Brooklyn and Manhattan. Of course, they work around his social drinking engagements and therapeutic style of friendships; first with father figure, high society editor and libertine stoner, George Christopher (Ted Danson) then with best friend, fellow starving-artist and super hero comic creator, Ray Hueston (pre-Hangover Zach Galifianakis, when his acting actually differed from role to role).

This show is incredibly well written, perfectly casted, full of hilarious and well played cameos, and only consists of three 8-episode seasons so it’s a manageable undertaking.

Now you can’t claim to be overwhelmed with options of entertainment. Turn on that Amazon Fire TV, grab a snack, and settle in for beautiful experience that is binging.