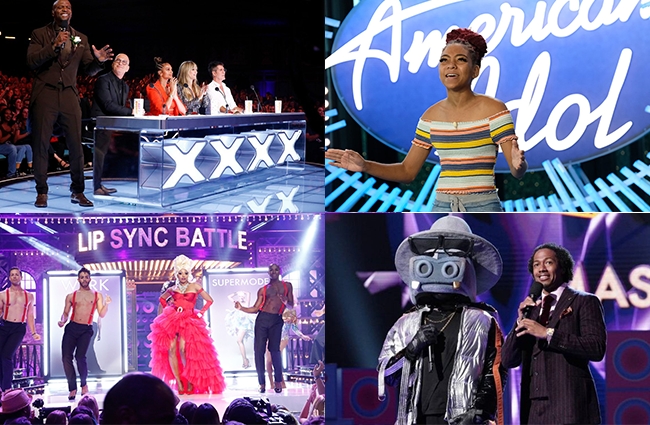 After months of speculation that football season might not be a thing this year, the NFL and (most of) the NCAA decided to power through the current situation to give us what is at least a semblance of what we’ve become accustomed to. Broadcasters have done their best to simulate a traditional game day but it’s hard to overlook the noticeable lack of fans packing the stands, the fake crowd noise being used in an attempt to supplement their absence, and Andy Reid’s Wilford Brimley mustache becoming obscured by the condensation on his face shield.

However, amidst this choppy sea of change, there’s been one oddly comforting aspect that’s remained the same: announcers unenthusiastically plugging televised singing competitions seemingly designed with your aunt in mind and the endless stream of ads promoting them during commercial breaks.

I absolutely hate these shows. Every single one of them. Sure, they all want you to believe they’re totally different than all of the ones to come before them, but at the end of the day, they all boil down to a premise that involves searching for people whose singing career would’ve peaked when they performed “The Star-Spangled Banner” at a minor league hockey game if they’d never had the opportunity to showcase their talents in front of a national audience.

In the early days of the genre, the concept was fairly simple: judges listened to people sing and gave them feedback ranging from universal praise to the scathing criticisms made famous by Simon Cowell, the Gordon Ramsey of this particular realm. Thanks to the resounding success of American Idol, we were eventually subjected to various iterations of this formula, whether it involved a panel that couldn’t see who was singing until they pressed a button to turn their magic throne around or having celebrities dressed up in costumes while belting out tunes and letting less famous celebrities try to guess the identity of the vocalist in disguise.

I’ve spent years trying to figure out why the general public has such a fascination with watching people sing. I guess I can understand the appeal of the schadenfreude that comes with watching contestants who vastly overestimate their vocal prowess because they think they nail it whenever they’re singing alone in their car only to have the reality they’ve constructed come crashing down. However, once the audition round ends, you’re left with a group of people who probably should’ve already managed to land a record deal if they really have a truly angelic voice.

Many of these atrocities have quickly come and gone over the years but plenty of them are still going strong, and as a result, I decided to rank the biggest ones that remain from terrible to most terrible. 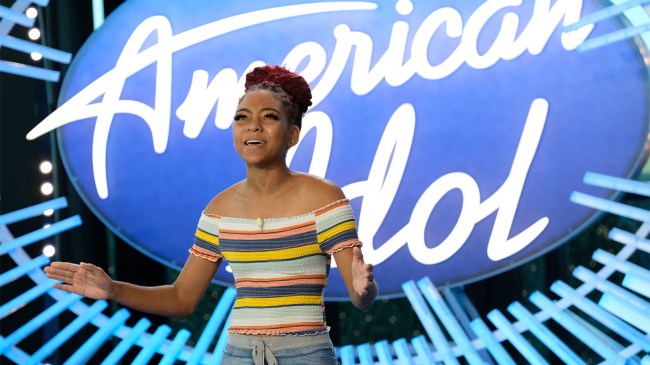 As I mentioned, we largely have American Idol to blame for all of this, as it’s managed to pump out 18 seasons since the first episode aired in 2002 and launched the career of Kelly Clarkson. Sadly, it also resulted in the objectively atrocious film From Justin to Kelly (featuring that year’s runner-up). The movie did technically win an award by securing a Golden Raspberry trophy for “Worst ‘Musical’ of Our First 25 Years” (but in all honestly, Clarkson’s most notable contribution to cinema is when Steve Carrell screamed her name while having his chest waxed in The 40-Year-Old Virgin).

To its credit, American Idol has produced a few who winners who eventually became bonafide sensations (even though it’s overall batting average wouldn’t even cut it on a Single-A baseball team). While it appeared it has lost its magic after being canceled by Fox decided to let it die in 2016 only to for ABC to resurrect it in 2018 as a shell of its former sell. It might’ve been a now for me, dawg, but in the end, it’s much more of a “yes” than the rest of the shows to follow. 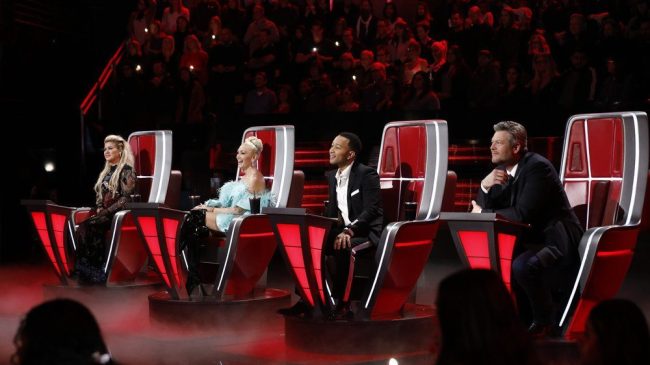 The premise of The Voice essentially boils down to the belief that ugly people shouldn’t be allowed to be famous singers. If some girl walked into the American Idol audition room rocking orthodontic headgear, there’s almost no way she’d emerge excitedly waving a flyer serving as her ticket to Hollywood even if she had a set of pipes that sounded like a combination of Fergie and Jesus (who I like to think carried a tune pretty well).

To address society’s inherent biases, the judges (who have already paid their dues to the record industry over the years) sit in chairs with their backs to the contestants. If they decide they have the chops, they hit a big button to swivel around to encounter….a big ol’ fat guy!?!?! With that voice!?!?! MIND. ABSOLUTELY. BLOWN!!!! Once they successfully recruit a singer to their team, they proceed to “coach” them, a process I imagine basically involves them channeling their inner J.K. Simmons in Whiplash.

In the end, I think the chairs are the primary draw here, which I’d love to take for a test drive at some point even if it ends with me getting whiplash that results in me ralphing all over Gwen Stefani’s shoes. 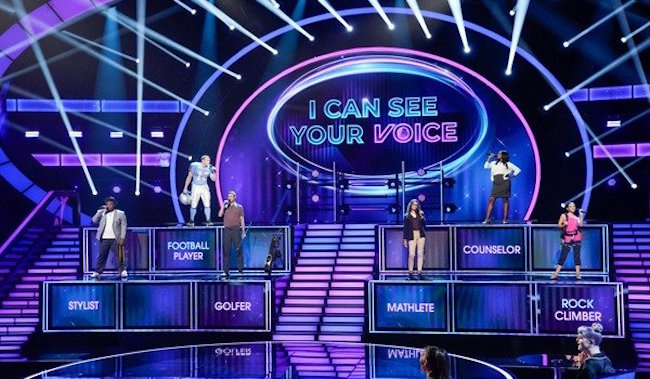 This is a recent addition to the singing competition canon that seems to be Fox’s attempt to serve as an antithesis to The Voice. In this particular one, a contestant goes out on stage in front of a truly star-studded panel of judges—including household names like, um, Curb Your Enthusiasm‘s Cheryl Hines and a person who dressed up as a flamingo on another show we’ll get to in a bit— and evaluated on whether or not they can sing based on their physical appearance and occupation.

Only one episode has aired, but based on what we’ve seen so far, it is a snooooooooooze.

There’s no rhyme or reason to who gets a chance to prove the panel right or wrong. It’s literally a coin flip, as there are two possible outcomes: they are either good or bad.  I can understand tuning in based on sheer curiosity, but if you managed to endure more than 15 minutes, you have more mental fortitude than I ever will. 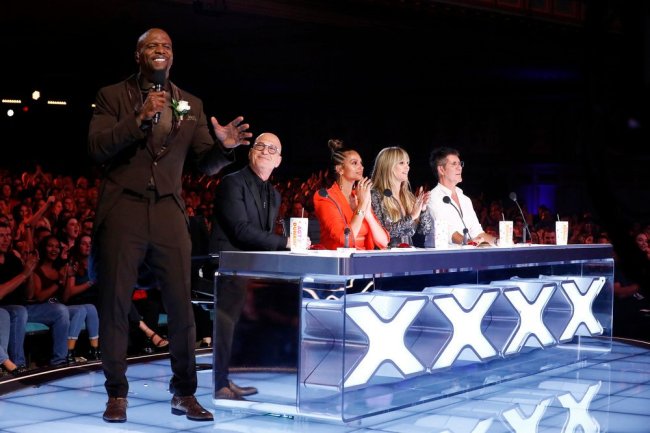 America’s Got Talent is more than just a singing competition and I initially debated whether or not it should qualify for this list in the first place, as you have to be kind of a moron to think that being able to sing can compete with magicians, jugglers, or a guy who swallows and then regurgitates everything from light bulbs to goldfish to billiard balls.

Now, I know I said I despise all of these shows but I was once pretty all-in on America’s Got Talent (primarily during the Howard Stern Era, where he was trying to clean up his image in an attempt to make people overlook all the cancel-worthy stuff he’s done over the years that he’s seemingly become immune to). There was no bigger letdown than watching someone light themselves on fire on (either purposefully or accidentally, which are both equally entertaining in their own way) only to see Nick Cannon usher a mediocre singer onto the stage.

These people have plenty of other options to choose from that they need to take elsewhere so we have more time for the ones who pride themselves on the ability to take a shot to the nuts. 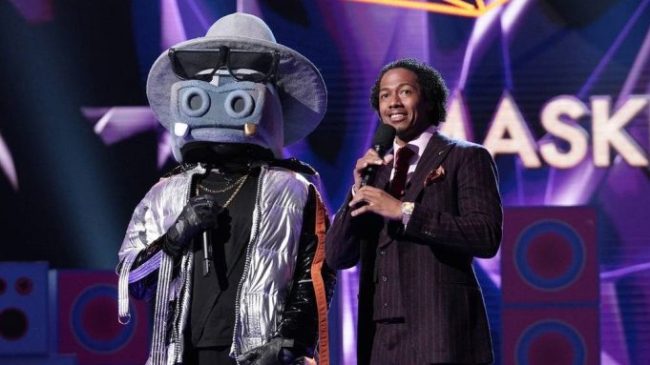 You may be aware American Idol and America’s Got Talent can trace their roots back to Pop Idol and The X Factor, two series that first aired in the United Kingdom before hopping across the pond. The Masked Singer is also an international import from South Korea (as is the case with I Can See Your Voice) that asks a simple question: what happens when you take some famous people, dress them up in costumes, and have them anonymously show off their vocal pipes in front of a panel of less famous people?

If you answered “Some garbage television,” you absolutely nailed it!

This is yet another show that baffles me, as I can’t fathom why people would devote time to watching something where you spend several weeks speculating a guy in an egg suit is Pauly Shore only to discover it was Andy Dick the entire time.

That’s truly electrifying television if I’ve ever seen it. 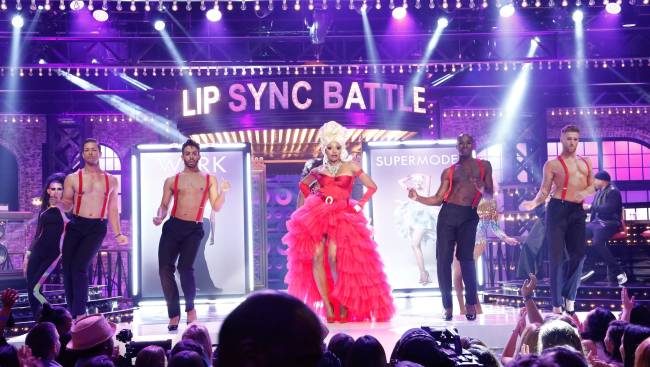 Now, this may be a slightly controversial pick, as Lip Sync Battle has many of the elements of a traditional singing competition without any of the, you know, singing. With that said, this deep-cable cat turd seems like the natural conclusion of all the other shows we’ve been subjected to over the years.

Lip Sync Battle is basically a TikTok video with a production budget that seems impossible to justify. For some reason, society has reached a point where having the ability to pretend to sing is considered a talent even though there are plenty of others that are arguably more difficult to master but don’t get nearly enough praise, like:

There are plenty of others I could add to that list but I think it’s a pretty solid collection.

Lip Sync Battle has been airing on Paramount Network for years and is essentially the byproduct of Jimmy Fallon’s throwaway Tonight Show bit that got some traction thanks to YouTube and the morons who flooded the videos with enough views to convince network executives to turn it into its own series.

The program itself features celebrities “battling” each other to find out which lip-syncer reigns supreme while Chrissy Tiegan stands on the side of the stage and offers up more claps than a circus seal (sidenote: I still don’t understand why Chrissie Tiegen has managed to permeate so many aspects of pop culture. She’s like DJ Khaled: I know they’re famous but I’m not completely sure why, as they just show up in everything, say something, and then peace out).

Sometimes I wonder if I’m thinking too hard about all of this. Maybe I just need to relax and watch the cast of The Big Bang Theory pretend to sing Sha Na Na songs. Am I out of touch? No, it’s the television-viewing masses who are wrong.