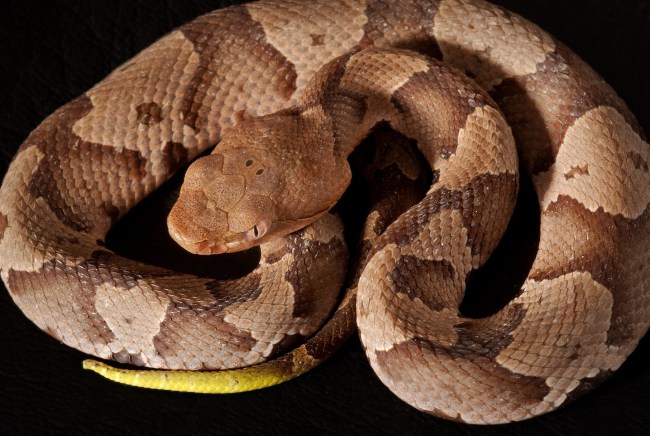 I have no problem with snakes. I had pet snakes when I was pretty young. Pet snakes I later found out were eaten by my family’s cat. You know what I do have a problem with? Evil mutant devil snakes roaming the mean streets of Virginia like the one below.

When I was in 3rd grade my dad came home from work one day and said ‘name anything in the world you want and let’s go buy it’ and my dumbass said ‘a pet snake’. I could’ve said a boat or the world’s sickest Nerf gun but ‘pet snake’ is what popped into my head that day.

We went out and bought a Colombian Red Tail Boa Constrictor and later went and bought a second one. Flash forward a few months and one of my snakes is missing. My mom tells me it got loose while she was cleaning out the cage. Flash forward a few decades to when I’m in college and my mom lets slip that my family’s cat bit the snakes head off but nobody told me about it.

I got really sidetracked here, my bad. Back to the topic at hand, this f*cking devil snake in Virginia. This rare two-headed copperhead snake was filmed near Williamsburg, Virginia after it was spotted in a family’s yard.

TWO HEADS. Look at this freak.

“Wild bicephalic snakes are exceptionally rare, because they just don’t live that long,” J.D. Kleopfer of the Virginia Department of Game and Inland Fisheries posted on Facebook on Thursday. “Too many challenges living day to day with two heads.”
“It appears as though the left head is more dominant — it’s generally more active and responsive to stimulus,” the Wildlife Center of Virginia said in a statement Friday.
“Radiographs revealed that the two-headed snake has two tracheas (the left one is more developed), two esophaguses (the right one is more developed), and the two heads share one heart and one set of lungs. Based on the anatomy, it would be better for the right head to eat, but it may be a challenge since the left head appears more dominant.” (via CNN)

Two heads. Two tracheas. Two esophaguses. One set of lungs. And an entire nation losing their shit over this beast from the depths of hell.

Seriously, take a close look at this snake and tell me that you don’t think the world is ending?

Two-headed animals are super rare but it’s not like they’re completely unheard of. Polycephaly even occurs in humans. There was some TV show about it a few years ago. But this has also occurred in turtles, cows, cats, lizards, whales, dolphins, and more.

According to CNN, the two-headed copperhead currently isn’t available for the public to see but if the snake survives it will be donated to a zoo where we’ll all be able to see it for the price of admission.