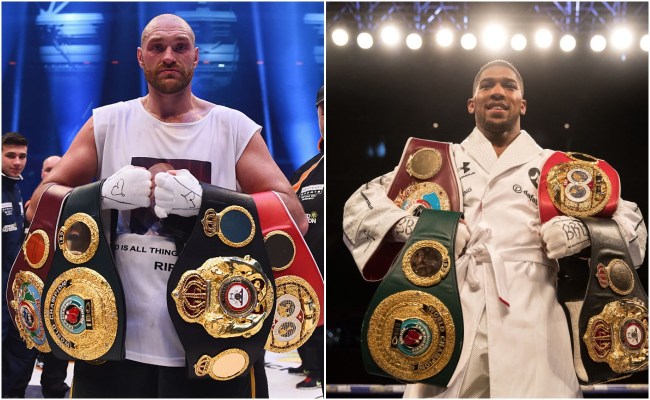 I don’t know a damn thing about boxing, so get ready for zero personality and all #facts in this article (not counting this sentence, of course).

According to Eddie Hearn, a boxing promoter who is essentially the British version of Dana White, heavyweights Anthony Joshua and Tyson Fury have reached an agreement on a two-fight deal. Hearn says that the first fight could take place next summer.

“We’re making great progress. We have the Dillian Whyte mandatory which is due before this fight. It’s fair to say [Joshua and Fury] are in agreement regarding the financial terms of the fight,” Hearn told Sky Sports.

“We’ve been talking to [Fury’s management team] MTK, giving them the assurances from Joshua’s side that all the details on the structure of the deal is approved from our side. And it is from Fury’s side, as well. We’re in a good place. It’s fair to say that, in principle, both guys have agreed to that fight. Two fights.

“[There’s] a lot to overcome in the meantime. We’re moving in the right direction. I’m confident that both guys have given their blessing for the fight to go ahead. The point of Fury, Joshua and the teams agreeing to the structure of the deal? The first fight could happen next summer. It will be 2021.” [via Sky Sports]

Currently, Fury, who most recently beat Deontay Wilder back in February, is the unbeaten WBC heavyweight champion. Joshua — who avenged his June 2019 loss to Andy Ruiz Jr. with a December 2019 victory — currently holds the IBF, WBA, and WBO titles.