Still On The Fence About UFC 238? Let These Finishes Sway You 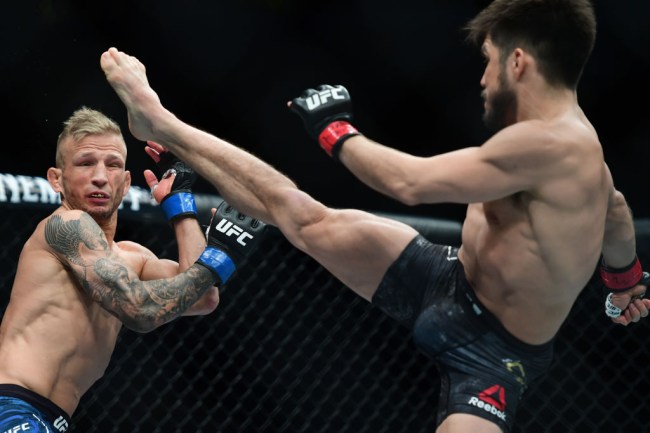 Nothing sells a fight quite like a picturesque knockout.

The one-hitter quitter KO may be the most satisfying ending in all of sports, topping the hail mary touchdown or the walk-off home run. It’s the ultimate coup de grâce, so to speak, something that speaks to our primal instincts and need for instant gratification, and if you’re still unsure about carving out a few hours on your Saturday night to catch the UFC 238 Pay Per View on ESPN+ and a yearly Yearly Plan for only 79.99 – over 25% off the original value of 109.99, consider that a handful of heavily equipped knockout artists will be performing on the main card.

Topping the UFC 238 event is flyweight champion Henry Cejudo, who’s stepping up to bantamweight in his quest for a second title. Cejudo, an Olympic wrestling champion turned MMA fighter, has never really been known for his knockout power, but that didn’t stop him from finishing T.J. Dillashaw in just 32 seconds when the two fought on the debut UFC on ESPN+ card in January.

Facing Cejudo is streaking bantamweight contender Marlon Moraes, a dynamic striker who knows a thing or two about fantastic finishes.

Earning his first UFC title shot after submitting Raphael Assuncao with a guillotine choke in February, Moraes predominantly relies on his kickboxing, which has led to some pretty impressive results in the Octagon.

So stunning are Moraes’ techniques, that even when he doesn’t land a clean shin, he still does devastating damage, as evidenced by the kick above, where he caught Jimmie Rivera with the inside ball of his ankle. There’s also this example, below, where Moraes missed the kick altogether, but still managed to deliver a vicious knee that flatlined Aljamain Sterling, dab pose and all.

Outside of the headlining fighters, the UFC 238 fight card on ESPN and ESPN+ also features what is being referred to as “The People’s Main Event,” a lightweight contest between Tony “El Cucuy” Ferguson and Donald “Cowboy” Cerrone.

The UFC’s all-time winningest fighter, who also happens to have the most finishes in promotional history, “Cowboy” is an easy sell for anyone on the fence about throwing down some cash to watch a few fights. Whether it’s on the mat or on the feet, Cerrone knows how to get the job done. He’s as creative as they come, and pieces together fight-ending punch-and-kick combinations like no other.

Now, one of the real beauties of mixed martial arts, one of the sport’s real advantages over boxing, is the submission game. Submissions and Brazilian Jiu Jitsu are really what put the UFC on the map back in 1993, when itty bitty Royce Gracie slithered and choked his way past a gaggle of giants to win the inaugural UFC tournament. And where a knockout can force any spectator to jump out of their chair and release a bellowing cheer, a submission has a different, and uniquely satisfying, visceral effect. It’s a primordial urge that Tony Ferguson has mastered.

Like the boogeyman himself, “El Cucuy” is actually a sneaky boxer and one of the most unorthodox strikers in mixed martial arts, but just when his opponents can’t take it on the feet anymore, Ferguson snaps the action down to the mat and slaps on any number of chokes, including his signature m’arce.

Truthfully, this list could go on for another 10 pages. UFC 238 is full of experienced and seasoned MMA finishers. Flyweight champion Valentina Shevchenko, who fights in the UFC 238 co-main event, has a pair of uber impressive submission wins on her UFC resume, as does strawweight contender Tatiana Suarez, who’s already become the most dominant wrestler in the history of women’s MMA. Then there’s Tai “Bam Bam” Tuivasa, who can throw them bows with more force and conviction than Ludacris, and bantamweights like Jimmie Rivera, Aljamain Sterling, and Pedro Munhoz, all of whom are not far from title contention and have recorded a bevy of stoppages during their UFC tenures.

The UFC 238 card, 12 fights deep, is, well, “stacked,” as promoters like to say, but in this case it’s no hyperbole, as 21 of the 24 competitors are ranked heading into the event. So expect a wild evening of knockouts and submission, and tune into the Pay Per View main card on ESPN+.