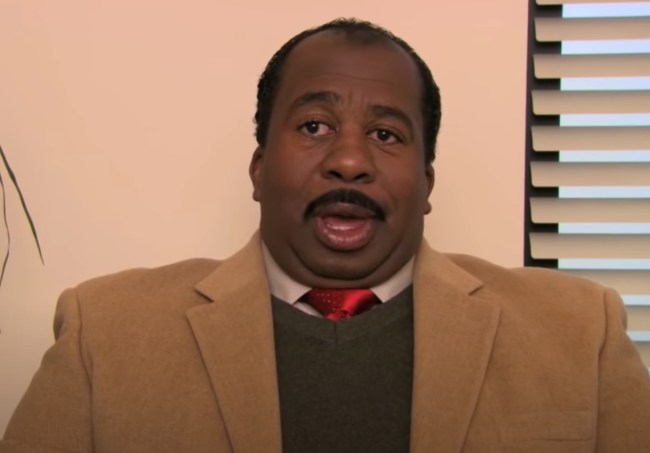 Nowhere in the Kickstarter is The Office explicitly mentioned, but Leslie David Baker who played Stanley on NBC’s The Office just launched a Kickstarter to help film Uncle Stan, a clear nod to his time in Scranton.

It’s probably due to copyright issues and not wanting to trample on NBCUniversal before the pilot even gets made but any fan of The Office is able to read between the lines here and see what’s happening. The show would be based on ‘Uncle Stan’ who leaves retirement in Florida and moves to Los Angeles where he’ll help his nephew get his business in order.

Frankly, the plot sounds incredibly basic. Like something you’d expect to see on TBS in the mid-2000s, possibly starring someone like Fran Drescher. It seems like a plotline that doesn’t have a lot of chops but that certainly won’t matter if the writing is solid.

Here’s the storyline, as listed on the Kickstarter page:

After enjoying his retirement in Florida, carving wood, enjoying the white sand beaches, and dancing to old disco, Uncle Stan (Leslie David Baker) gets a call from his nephew Lucky in Los Angeles asking for help with his two kids and running his motorcycle/flower shop. With his business failing, his kids growing up without enough attention, and on the brink of losing his patience with the cast of characters he has working in the shop, Lucky is going to need all the help he can get from no-nonsense Uncle Stan.

When Lucky picks up his uncle at LAX in a motorcycle with a sidecar laden with flowers and no room for his luggage, Uncle Stan knows that he will be in for quite the adventure and challenge. With his unique personality and business acumen that he has acquired over decades, Stan is sure to clash once or twice with the wild personalities that Lucky has working in the shop. With his lady friend and soon-to-be fiancé completely in the dark, Uncle Stan must take swift action to make sure that not only his nephew comes out on top, but that he is able to maintain some semblance of his previously comfortable lifestyle moving forward.

You can back the Kickstarter with donations ranging anywhere from $1 to $10,000. Perks range from a ‘special thank you’ to an exclusive MP3 of the show’s theme song. There are quite a few $10,000 options. One will get you a visit to the set where you’ll meet and greet the cast, along with an Executive Producer credit. Another $10,000 option is for artists/musicians and a chance to have your song featured on the show with your band performing it.

You can visit the Kickstarter page to see all of your perks and backing options if you want to be a part of getting Uncle Stanley made. The campaign has been organized by Leslie David Baker and his business partner Sardar Khan.