Parts Of US Colder Than Mars, Sharks Are Literally Freezing To Death And Some Of Niagara Falls Froze 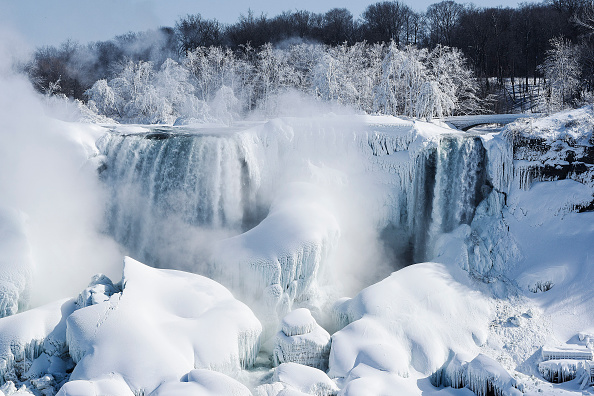 For most of the U.S., it is excruciatingly cold. Some would say its colder than the underside of a penguin’s ballsack. The northern half of the United States is especially bone-chillingly freezing. So cold in fact that parts of the U.S. are colder than the surface of Mars, some areas of Niagara Falls are frozen, and sharks are washing up ashore after literally freezing to death. Yes, that fucking cold. Better stock up on the hot cocoa and bourbon.

On December 20th, the Curiosity rover recorded a peak temperature on Mars to be -9 degrees Fahrenheit. But if you’re living in the Upper Midwest you are being hit with some subzero temps that are colder than my father’s heart on the day when he left for cigarettes and never came back.

A reinforcing blast of Arctic #cold will set daily record lows through at least Tuesday in parts of the Plains, Midwest and East. https://t.co/7xpymLa7GG pic.twitter.com/AyHQd7DyMr

U.S. and Canadian Coast Guard had to send ice-cutting boats to free two ships stuck in the ice on the near Sault Ste Marie, Michigan this week.

US and Canadian #CoastGuard crews freed two ships stuck in the ice on the near Sault Ste Marie, #Michigan this week. Coast Guard cutters broke the ice in the area to free the ships. pic.twitter.com/BQk5bFMF2c

The Mount Washington Observatory in New Hampshire had record-breaking cold temperatures as it hit -34 degrees, beating the previous record low of -31 degrees that was set in 1933. The Northeast’s highest peak show a man dumping a pitcher of boiling water and having it turn to snow as it hit hurricane-force winds that had a temp of windchill of -84 degrees. Humans shouldn’t ever live, visit or throw water around anywhere on the Earth that has a temp of -34 degrees.

.@MWObs really knows how to make science fun. Watch what happens as they pour boiling water into hurricane force winds. The temp was -31°F with a wind chill of -84°F! pic.twitter.com/sTIkrYAUwM

In Ohio, a dog was found “frozen solid” on a front porch. The dog’s owner says utilities at the home had been shut off but he had been taking care of several dogs while living elsewhere. The homeowner said he doesn’t know how the one poor doggo got outside. The Humane Society said they may pursue animal cruelty charges in Toledo Municipal Court.

In the last three days, three Atlantic White Sharks have been found frozen solid after washing up on Cape Cod Bay, Massachusetts. The Atlantic White Shark Conservancy said, “We hauled the shark off the beach and it is currently thawing at NOAA Fisheries Service to be dissected later. A true sharkcicle!”

Even in New York City, when the ball drops in Times Square, the temperature is forecasted to be about 12 degrees, but windchills will drop the temps to 5 to 10 degrees BELOW ZERO. Maybe just watch the ball drop from the comfort of your home that has a sufficient supply of Maker’s Mark 46 to keep you warm and fuzzy.

It’s so ridiculously frigid that parts of Niagara Falls have frozen over. Brave or idiotic tourists have ventured the area of upstate New York and Canada. The arctic blast has pummeled the area with zero-degree temps, causing some parts of Niagara Falls to freeze over. With some of the coldest temperatures on historical record, the area looks more like Hoth than upstate New York. Do these people not realize that planes fly to the Cayman Islands this time of year and you don’t have to go to a place where the temperature could end your life?

This not painting it's real picture of Niagara falls now in winter cold pic.twitter.com/6NA4e9LsSm