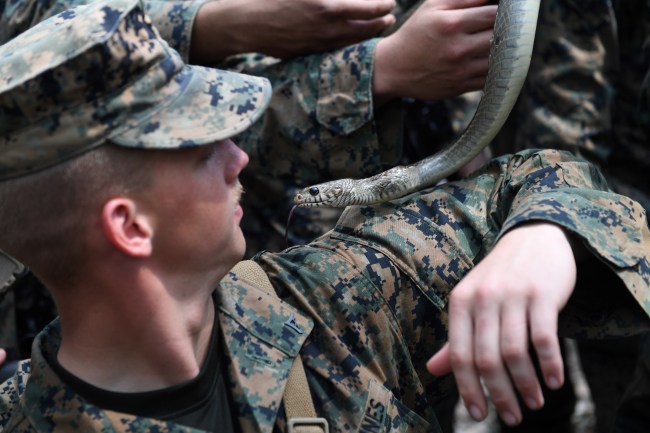 The annual Cobra Gold event took place in Thailand last week with thousands of U.S. troops heading to Thailand for a joint survival skills training exercise with 29 other nations. According to reports, this is the largest annual joint-training event in the Asia-Pacific region and based on the pictures I’ve just seen this is also the most heavy metal event imaginable.

Survival training sure has changed since my childhood days in the Boy Scouts of America where we were taught to tie knots in our jeans and blow air bubbles to stay afloat in the water and to forage for edible foods. These dudes are out there learning to chop the damn heads off of a cobra and survive on hydrating snake’s blood!

I’ve eaten scorpion, tarantula, and rattlesnake once in NYC at an Explorer’s Club party that served up some wild food but I have to say that raw snake’s blood is even too much for me. Generally speaking, I’ll try any food once or twice just to see if I like it but drinking blood is where I’m drawing the line. That’s officially further than I’m willing to go unless I literally need that blood in order to survive which I guess is the point of all this training.

This is an annual event and this is far from the first time U.S. soldiers have been gargling cobra’s blood but that doesn’t make this any less disturbing:

The US Marines got stuck into the drills on Tuesday as they lined up to drink the blood of a decapitated cobra – which is said to be a good source at re-hydrating the body should drinking water not be available during a jungle mission.

Some of the soldiers stuck out their tongues tentatively. Many squeezed their eyes shut, while their comrades looked on and laughed – with some even taking cellphone pictures and video to capture the moment.

Thai soldiers showed the 10,000 competing troops how to properly kill the snake first.

A number can also be seen almost celebrating as they guzzle down the snake blood – described as ‘fishy’ tasting – in front of their jubilant comrades at Akatotsarot Camp, in Phitsanulok, Thailand. (via DailyMail) 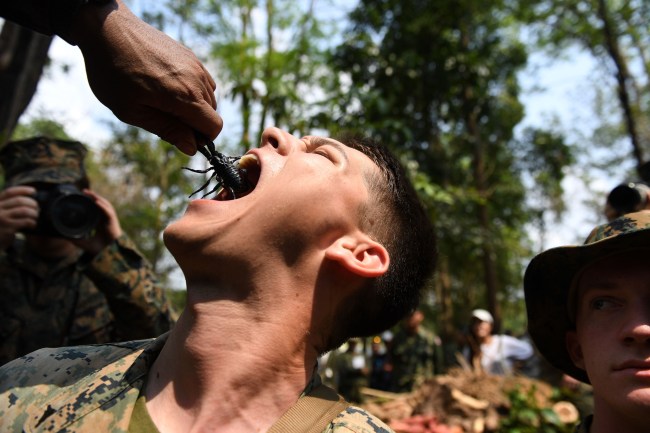 The pictures below are pretty graphic so if you’re not ready to see some soldiers sucking down snake’s blood you might want to head out now. For anyone else, check this out:

I never saw 👀 this.
OMG the #Marines are a next level of hard core.😱

This Marines drink 🐍 Cobra blood, eat spiders 🕷 and scorpions 🦂 and behead a chicken with their teeth.

US Marines drink blood of beheaded cobras and eat scorpions as they learn survival skills during wargame exercises in Thailand https://t.co/P9ifrP44at

US Marines drink the blood of beheaded cobras and eat tarantulas in brutal wargame exercises https://t.co/tO7E2Fj7jD

And here’s a clip of the Jungle Survival Training at Cobra Gold 2020:

There are a ton of these wild photos over on the Daily Mail for anyone out there who wants to check out what it looks like for some crazy troops to suck down snake’s blood during training. You can click here to see all of those pics.